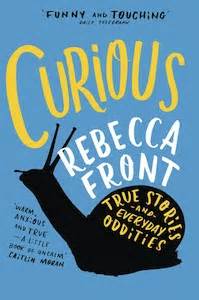 Most of us know Rebecca Front as an actor in TV series like ‘Lewis’ and ‘The Thick of It’, in this book she demonstrates she’s a wonderful writer too.
Stories from her life are blended with wry observations about human nature. A great book to dip into. I bet you won’t be able to resist reading out bits to friends or family, drawing their attention to your own life experiences. Half way through I already hoped there was a sequel.
Did you think that your family was the only one trying to avoid compulsory socialising on holiday?
Are you looking for reassurance that you weren’t the only child with a swimming phobia which lasted well into adulthood?
Are you obsessed with the difference between “less” and “fewer”?
Oh…. just me then!
Mind you, I do think emigrating to Australia, in order to avoid using the bathroom, in the circumstances described, might just be a tiny bit of an overreaction.
Verdict: I enjoyed it tremendously and I was left wishing Rebecca and I could be BFF.