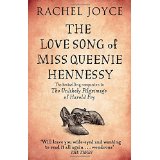 Described as the companion to ‘The Unlikely Pilgrimage of Harold Fry’*,  in my view you could read this as a stand alone story, but the reader would miss out on the nuances which form much of the back story, without which it’s possible that the almost unbearably bleak moments in this book could make you give up too soon.

This time the story is told from Queenie’s perspective and it is much darker.  Familiarity with the parallel story made me want to find out what happens in the end despite the sad inevitability.

Set in a hospice, the focus is on the parallels between Harold’s journey to reach Queenie before her death and Queenie’s own journey back into the past, a past she recounts in a letter in which she finally reveals her love for him, her feelings of guilt and why she left.

Very well researched and written but I found it absolutely devastating. Would I recommend it? I think so, but only you will know whether you could deal with the searingly honest portrayal of difficult issues such as terminal illness and end of life care.

To quote from the end of the book “Well. There it was.”

* reviewed for Roseland Online in April 2013