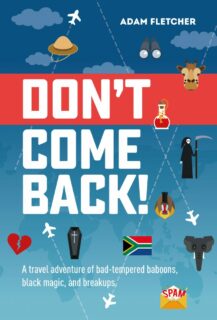 Don’t Come Back! by Adam Fletcher
Published independently, 2019
Described as “a funny travel adventure of bad-tempered baboons, black magic, and breakups”, this seemed like just the travel related tonic that’s needed at a time when most of us are unable to go further than the corner shop.
Sadly, I didn’t find it funny at all and many of the stories, particularly those involving his disorganised and chaotic companion, Nick, were milked way beyond a level which held my interest.
I thought some of his attempts at communication with local people bordered on the offensive. After all, who, outside Fawlty Towers, would find it amusing to use the phrase “no ticketo” as an attempt at Spanish?
I suspect the author’s experiences made for some great stories late at night with friends or in the pub. Unfortunately they lost something in the translation and, despite being written relatively recently, I was left with the impression of a book which might easily have been written at a time when hippies sought peace and so-called enlightenment in attempt to “find themselves”.
In the interests of balance, there is some useful historical background, for example the description of the political situation in Cuba. But, for someone who has that level of knowledge, it’s amazing how little he appeared to know about what life would actually be like in the countries he visited.
The author has written other travel related books and has plenty of fans. Unfortunately I’m not one of them.