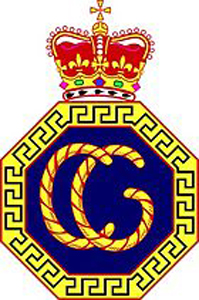 When I first started writing these articles, Mark at Roseland Online raised the question of copyright of the pictures I use in each edition. Many of these are mine but I get a lot from the Internet sites of various emergency services and pictures of views of the Cornish Coast on Tourism Sites. I therefore set out to write to as many organisations as possible to seek their permission to use their pictures without the payment of Royalties and I was gratified that, almost without exception, permission was readily granted.

In the reply from the Maritime and Coastguard Agency, giving me permission, I was asked to ensure that it was made clear we were a volunteer group and not part of that professional body. I have always tried to do this in passing but thought perhaps it was time to emphasise the fact – though I am sure most people know it already.

We are volunteers who readily give our time throughout the year to assist the professionals. We have a properly organised training programme but confine ourselves to the simpler things of life – what we can see and hear and the using of our judgement to decide if it is necessary to bring this to the attention of Professionals. We do not have the sophisticated equipment of the MRCC, the RNLI or the Helicopter Groups, in which I include the Air Ambulance.

Because we are giving our spare time we do not have the continual training that they do, both ‘on the job’ and dedicated Courses. But we have one function which they sometimes have difficulty in fulfilling – we are close to the scene and can sometimes see and hear things which they cannot.

In days gone by, of course, when budgets were bigger and equipment less sophisticated, many of the Coastal Lookouts used by the N.C.I throughout the country were manned by Professional Coastguards who, 24 hours a day, would clamber to cliff tops and sit in the watchtowers, a position from which they could see the coastline and inshore area below them. Technical advances and ever tightening budgets decided the Powers That Be that these lookouts were poor value for money so they were shut. 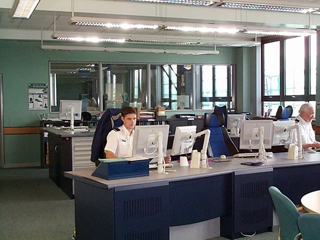 In our case that blinded our Falmouth Coastguard Station to the beaches and headlands between Zone Point and Nare Head. Without going into the whole story again (you can read it in my early writings) N.C.I. stepped into the gap – willing volunteers, training confined to their specific function, who give what time they can to providing safety cover over our beaches and close inshore waters. Remember – there are no Lifeguards on our local beaches! People using the sea and beaches are doing so ‘at their own risk’ .

Another task which has recently raised its head is a request from the Border Agency, who are responsible for preventing smuggling and illegal immigration around our shores, to keep a look out for suspicious boats, landings or events we may see on our beaches. This is a return to the old days when Coastguard was first formed and one of their principal duties was prevention of smuggling. Nowadays of course we are not talking about tobacco and rum with five and twenty ponies doing their stuff but drugs and, becoming a major problem, people smuggling.

Cornwall has the longest coastline in the British Isles, over 400 miles, with many secluded beaches and coves on which an easy landing may be effected. It also sticks out into the Atlantic so that its approaches cannot be so well monitored as, for example, the English Channel or the Welsh Coast. This makes us a prime target for the fast smuggling RHIB or the lone fishing boat. Because of the narrowness of the County a main road is never far inland and many beaches can be accessed by a four by four. As it has been in the past, a smugglers paradise.

Cornwall, of course, has a history of smuggling. Way back in the 15th and 16th centuries it was almost regarded as an honourable occupation. Fortunes were built on it and the ancestors of many of our local ‘gentry’ were active in promoting and protecting the ‘Trade’. At that time Government action to detect offenders was ill organised and not much effort put in to it – maybe because Government was in the hands of the Gentry and many cellars were kept stocked with brandy and cigars! 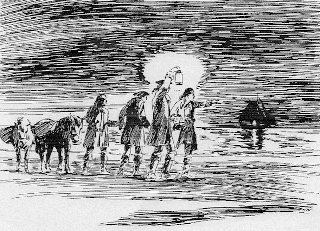 It was confined to Preventive Men and Riding Officers, Coastguard dealing largely with shipping and harbours. The Riding Officer was just that – a sort of freelance policeman on horseback who was supposed to ride along the coast in his area looking for smugglers. He would often work with the Preventive Men who manned Preventive Cutters, rowing and sailing boats which tried to catch smugglers offshore. It was all very disorganised until Government began to realise the extent of the revenue they were losing and in early 19th century, began to tighten up patrols.

Smuggling was a two way trade, English goods went one way, Continental goods the other, perhaps why those engaged called themselves ‘freetraders’ and the act itself became known as the ’Trade’. The man who began it all was Edward 1st in 1290. Up until then it was unknown. England’s great industry was the production of wool, valued on the Continent because they could not match its quality for weaving. In 1822 they amalgamated all three ‘services, into the embryo Coastguard which became what we know today. Penalties became severe, transportation was the norm, though one unfortunate man. Robert Lang of Veryan, was hanged at the Ruanlanihorne crossroads as an example. Other than that he is well recorded I can find nothing else about him – perhaps someone can help. At a guess I suggest he resisted arrest and possibly killed an Officer. 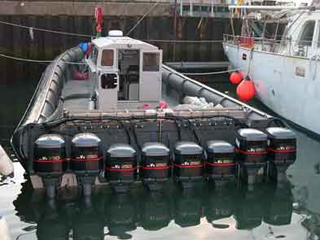 Edward, short of money because he was trying to hammer the Scots, realised that he could raise some revenue by putting a tax on the wool trade. Exporters worked out that it would now be far cheaper to organise a boat from some obscure southern port and avoid the tax. Thus wool became the first goods to be smuggled. It began along the Kent and Sussex coast, wild areas of marshland, sheep country as well, and no great distance from France. Bribery of Magistrates and those charged with collecting the dues was common so it flourished.

It became so widespread and such a loss to the Treasury that the complete export of wool was banned in 1640 and the penalty for smuggling was death. But the rewards were too great, the whole thing too well organised, and too many people involved. The Trade spread from the Romney Marsh area, along the south coast of England, to Devon and Cornwall. No doubt the crew of the boat, arriving, say, in Cherbourg, and doing a round of the pubs, thought they could raise even more money by taking on board a cargo of French brandy for sale at home. The Trade was born.

Times have moved on, your ‘woollen’ jumper isn’t and comes from China, smoking is prohibited, and the supermarkets have made smuggling brandy uneconomic. Drugs and people bring in the big money and England is a target. Economic cuts have reduced the Border Agency to an overstretched force, welcoming any help they can get. That is where we come in. After all we have ‘Eyes Along The Coast’, We could do with a few more pairs of eyes. If you would like to help, do something different, give Patrick a ring on 01872-501838