If You Get It Wrong It Can Be Fatal 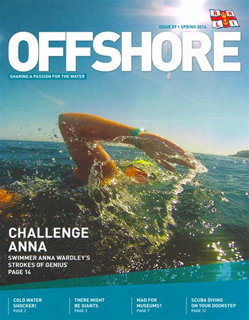 I am an Offshore member of the RNLI, a relic of my sailing days when I thought I might need their services. They send me an excellent magazine every quarter giving details of rescues which have been undertaken by their crews, some of the individual crew member’s experiences and general advice to water users. Consider that the vast majority of the crews are volunteers who get nothing out of the time they give save the satisfaction of helping others. You may find that, on the one hand your faith in mankind receives a huge boost while on the other feel amazement at public’s ability to get into difficulties. Perhaps the crews do get something extra from the work, a huge feeling of camaraderie which comes in any organisation when you know that your life may depend on the person standing next to you. You get immense satisfaction when your efforts work and great sadness when they fail.

I have written many times about signals and communication and their importance in all rescue operations, be they the relatively minor part played by the NCI to the very dangerous rescues carried out by RNLI and helicopter crews. The latest edition of the RNLI Magazine shows it has always been thus and an incident occurred 100 years ago which brought tragedy to one of this country’s shoreline communities. On 27th October, 1917, 13 of the 15 members of the Salcombe lifeboat crew were lost when the boat overturned when returning to its station. I will not give the full details here – if you want to find out more you can buy a book about it by e-mailing salcombebooks@rnli.org.uk. 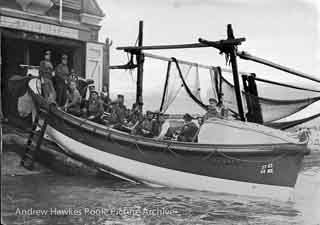 On that day, at the time of a strong gale, a topsail schooner, the ‘Western Lass’. was driven in to a sandy cove at 5am. She narrowly missed the rocks and was seen to go ashore by the local Coastguard. He raised the alarm and East Prawle Lifesaving Apparatus Company mobilised as did the Salcombe lifeboat. The Company volunteers made their way to the beach and found the ship hard on the sands but within reach of rockets fired to get lines aboard. By this means every crew member was hauled to safety and the volunteer in charge signalled the Coastguard that all were safe. The Coastguard then tried to call Salcombe to stand down the lifeboat but, unfortunately, there was a fault on his telephone. Literally a few minutes after he tried to call the Lifeboat Station the boat was launched and they set out unaware that their services were not needed.

The lifeboat, ‘William and Emma’, was a pulling boat, crewed by fifteen men. At this time the RNLI was in the process of changing over from oars to engines and there were still a good many of the old boats in service. Locally to us it was a pulling lifeboat which tried to rescue the crew of the Hera some two years earlier. The ‘William and Emma’ made her way to the scene and, when she got there, the Coxswain realised that the crew had been rescued and the lifeboat was not needed. She turned around and made her way back to Salcombe. Now Salcombe has a notorious bar on which many a vessel has come to grief. As the lifeboat started to cross the bar to gain the safety of the harbour she was picked up by a mountainous wave and overturned, all the crew being thrown into the water. Conditions were such that thirteen of those men drowned, only two survived and were rescued from the shore 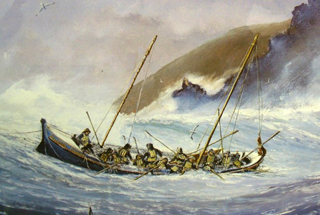 Though it was no one’s fault this tragic loss was completely un-necessary. The ‘Western Lass’ crew were safe even before the first lifeboat volunteer put his oar in the rowlocks. It was all down to mechanical or electrical failure as is the reason behind so many lifeboat launches today. But that failure meant that the vital message did not get through to its destination, yet another example of the need to make sure that what you say in a message is accurate AND that it is acknowledged by the recipient. I suppose you could say that is the whole reason that we man our NCI Lookouts – to see if anyone needs help and to make sure that their need is passed to the correct authority. If we do not get the message right or make a mistake in its transmission we might as well not be there.

Great efforts are now made throughout the world’s communication systems to overcome the obvious difficulties of spelling, pronunciation and understanding. The biggest of these is the NATO Alphabet where every letter has a name. object or country allocated to it and every one of the first ten numbers has a correct and agreed pronunciation. Hence we have ‘I’ India, ‘J’ Juliet and number one is pronounced ‘One-er’.

When all is quiet in the Lookout I will occasionally turn on the Falmouth Port Operations Channel and marvel that an Indian Captain on his immense ship can talk with the Pilots though his accent would normally be indecipherable to them – as, no doubt, is theirs to him. Even today, just before writing this, I was in the Lookout and listened to the French Coastguard arranging assistance to a British yacht in difficulties down near Ushant. English is the international language of all rescue services and by using the NATO alphabet the casualty’s position was pinpointed and a tow arranged.

The Lookout is now closed for the winter and it will undergo its usual re-furbishment and, hopefully, replacement of some of the equipment. During the winter Watchkeepers themselves will get a brush up as there will be one or two light-hearted quizzes to find out what you can remember when a question is suddenly asked. We all have our lapses. I, for one, can never remember how far it is from the Lookout to Nare Head. I know roughly but it would never be a problem as it is plainly marked on our chart. I never forget our key code though – so at least I can get in and out! 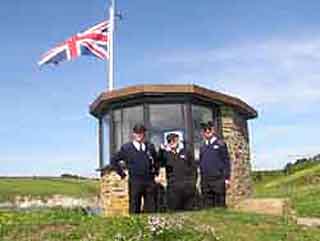 New volunteers will continue their training so that they should be fully qualified by the start of next season. On nice days, by mutual arrangement with the training staff, the Lookout will be opened to allow on the job training, the idea being that all our recruits can ‘do it for real’ and no one will be suddenly asked to work in the Lookout yet have no idea what is there.   Sadly a number of older members have decided to hang up their binoculars, perhaps to move away to be nearer family.

Our losses always seem to be because we are all getting older and very few people leave because they are in any way dis-satisfied. I suppose it is because many of us are retired and see it as a good way to give something back to the community, to give ourselves something satisfying to do and to join a convivial bunch of people with whom we can mix socially when the occasion is right. We are getting an increasing number of younger people who are still working but their hours allow them to give us the necessary time – about five hours in any month. We seem to fight an eternal battle to keep numbers up, always aiming to have enough volunteers to man the Lookout seven days a week. Yet we never seem to quite get there so we can always use a few more. Give it some thought and the give Sue a ring on 01872-530500 or Chris on 01326-270681.