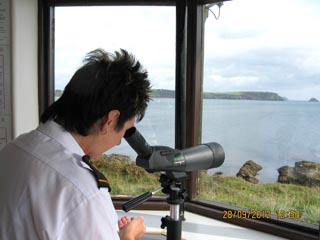 The new season has started and the Lookout is open – though still not on Tuesdays because we do not have enough volunteers to man everyday of the week. We still need more people, men or women, and I will put those vital telephone numbers at the end of this article. But back to work. As I write this at the beginning of June I have done three watches and the weather has been very mixed. I have peered hopefully through murk and mist, barely able to see Portscatho, I have luxuriated in brilliant sunshine, dazzled by the sun glinting off the waters – and, that same day, struggled to see through the rain swept windows. Oh, to be in England now that Spring is here!

Sitting there watching people in kayaks or attempting to surf in the feeble waves I fell to pondering the effects of progress on our leisure activities – particularly those associated with the sea. You have all seen sepia photographs of ladies using bathing machines on beaches, men paddling in the waves in bathing suits which were nearly long trousers and a shirt, early dinghies crewed by elegant men in straw hats. What do we see now – bikinis, wet suits and paddle boards where the ‘crew’ stands up and balances. Over the years there have been innumerable changes and developments in equipment which make the recreational use of water more convenient and, above all, safer.

Possibly the greatest is the neoprene wetsuit. More people die from the effects of hypothermia in water than simply drown. Many of those cases where the primary cause of death is drowning are brought about by hypothermia. Though I have never personally suffered from it I have read many accounts, attended lectures and spoken to those who have had the experience. The theme which runs through most of their accounts is that the cold produces supreme lethargy.

You do not want to fight it, you lose interest, you just want to give up and let go. If you do you start to sink and ingest water – hence you drown. Had the water been tropically warm, the sun out, you would not have given up the fight to stay alive, (You would probably have been eaten by a shark instead.!). In the film ‘The Cruel Sea’ there is a scene where a crew have to take to a lifeboat in the North Atlantic.

The Captain forces them to sing, clap their hands and move about – anything to keep circulation going and make some effort. This scene was not the figment of a screen writers imagination but recommended practice. A year ago a kayak was swamped off Porthcawl, the occupant being thrown into the sea. He spent twenty minutes in the cold water before rescue. The RNLI say that he only survived because he was wearing a wetsuit. 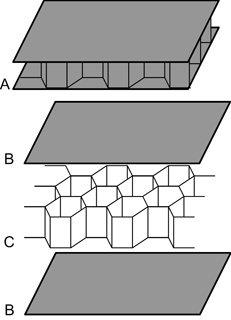 Neoprene is a rubber structure which contains pockets of air, rather like a honeycomb. Each little bubble is air tight and the whole suit makes a warmer barrier between the wearer’s body and the sea, slowing heat loss and preserving body temperature. You stay warmer – so you may live.

Another huge change has been the development of terylene, nylon and, later Kevlar, to make sails. Traditionally sails were made of heavy, woven natural fibres such as flax. When I first started sailing in the1960’s there were still some of these about and I remember them, wonderful works of art when new but pigs to preserve as they were prone to mildew and rot. Sails which got wet had to be hung up to dry, not an easy thing to do on a small boat and wives tend to object to having them in front of the living room fire.

Large vessels such as the Thames Barge had heavy flax sails, mainly coloured red. They did not chose red because to was pretty but the sails were dyed that colour because of the proofing. A new sail would be spread out in a field and the crew would go to work with brooms, scrubbing a mixture of fish oil, seawater, horse urine and ochre into the sail. This would make it waterproof and flexible, very necessary for being handled by a crew of two.

Nowadays even yachts of forty or fifty feet long have light, flexible sails which can be screwed up anyhow and stuffed away into bags or sail covers with scant thought for drying them first. Don’t try to do that on a keen racing boat, though! The skipper will want them nicely folded first to keep their shape. Because of their ease of handling and windward efficiency these modern sails have added immensely to safety at sea. 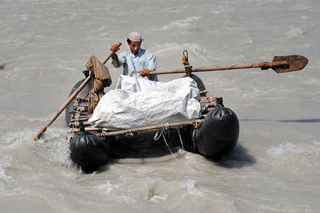 We are so used to seeing RHIBS (Rigid Hulled Inflatable Boat) and inflatable boats in our bay that we probably never give a thought to their origins. The RHIB developed from the ordinary inflatable with the development of fibreglass resins making it possible to make a light and waterproof hull to which could be successfully attached an inflatable side sponson – the bit you blow up.

Rubber sheet had been about for a long time and in 1838 the process of vulcanisation made it easier to use. The Duke of Wellington (yes – he of Waterloo) experimented with rigid pontoons which had inflatable sides in 1839. But the idea was abandoned. The loss of the Titanic in 1912 made the world realise that it would never be possible for the large passenger liners to carry enough conventional lifeboats and that some more portable and collapsible, easily stowed ‘boat’ had to be found. Research went on between the two wars and Goodyear developed a method of attaching rubber to other materials. The rubber life raft was born and development since then has never ceased.

Man is inventive. In 1987 we were in Pakistan, high in the Hindu Kush, when we saw another version. You take a huge inner tube from something like earth moving machinery. No matter if it punctured, you just cut it where the puncture is and tie two knots in the rubber. You now have a long piece of tubing which can be inflated using the original valve. You get a large, flat piece of plywood, make a series of holes around the edge and lash the rubber tube to the wood. You now have a somewhat wet boat which can be used as a ferry to cross rivers, a couple of men paddling and a few passengers, ankle deep in water, prepared to pay to cross the river – or goats or chickens. The latter are not very happy at the idea but ducks don’t mind.

There is no end to the things you can see from the Lookout on which you can muse in an idle moment on the past. Life jackets. Somewhat like the boats I was just writing about these developed because man realised that air floated and if you could capture it you could use it to hold you up in water. So they used inflated bladders, animal skins or gourds to help cross rivers. Seamen needed something more sophisticated and in 1804 you could buy one made of strips of cork sewn together. 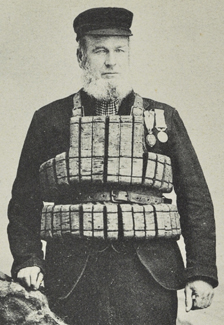 The RNLI issued their first one to crews in 1854 and since then have been at the forefront of this development. Not everyone has been successful. Kapok was used a lot in the world wars but they caused many casualties when men jumped from a ship wearing one. The kapok was rigid, worn back and front, and when the water was reached the kapok stopped and the body didn’t. The result was a broken neck. Other types of ‘solid’ jackets if thrown from a ship to swimmers in the water were equally capable of inflicting deadly injury. Much research and experience has gone into the jacket we see today.

We live in a developing world and it seems to be developing faster and faster as we live. Perhaps I am just getting old but I find it hard to keep up with the latest technology – but I suppose it keeps the brain active. Oh, those telephone numbers; Sue on 01872 530500 or Chris on 01326 270681.

Just before I go.. There is a Shanty Night at the Harbour Club, Portscatha, on 23rd July, when the group Barflys will be on stage. It starts at 8.30pm and all proceeds in aid of Portscatho NCI.

Pictures and idea from R.N.L.I. and personal.