They Don’t Come Much Bigger Than This! 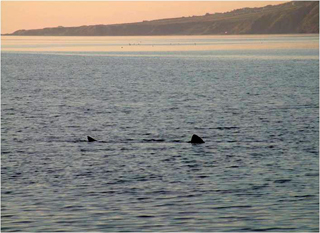 In the Lookout on one of those all too rare sunny and calm days this summer my eye was caught by a distant speck about half a mile out. Binoculars were needed and, with their aid, I could define the distinctive triangular fin of a basking shark. They are not often seen by our Watchkeepers, probably because they stay some distance out and don’t usually come in to the bay to feed. Only the fin breaks surface and if there is any chop on the water they are easy to miss. There was, however, no need to panic or get all the swimmers out of the water.

These giants are harmless, swimming along with their immense mouth open as they filter the zooplankton out of the water, in through the mouth and out through the gills. But they are big – perhaps thirty feet long and weighing over two tons. That is about twice as long and twice as heavy as your car! They are the second largest fish in the world, only beaten by the whale shark, which we never see in these waters, being confined to the tropics. It too is a filter feeder, cruising along with its mouth open. The biggest recorded weight of these is 42 feet long and weighing 34 tons. You don’t get many of them on the fish market slab! 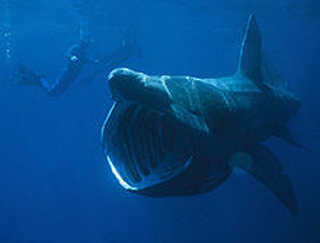 Basking sharks are almost always solitary and seem to take no notice of boats. Why should you when a flip of your tail is enough to sink one? If you see one close to you have this vision of an immense mouth, probably at least an yard wide, a huge body and a gently moving tale pushing it along at about two knots. It ignores you, perhaps just diving underneath your boat to re-appear on the other side, then vanishing into the blue water.

Occasionally, however, for a reason no one can understand, they gather in groups, anything up to 100. I recall on one occasion we were motoring down from Trevose Head towards St Ives and about five miles offshore. It was a flat calm, not a breath of wind, when we ran into a group of sharks. We counted seventeen fins sticking up, they were all around us, going about their business as we slowly overtook them. Never before or since have I seen so many.

Our most common visitor to the seas of Pednvadan is the seal. That is not surprising as we have a resident colony on Black Rock in Falmouth Harbour. These are Atlantic Grey seals, larger than the common seal, and neither group are endangered. Indeed fishermen will say that we have too many greys and it is agreed that the population is rising by some 7{c8c3b3d140ed11cb7662417ff7b2dc686ffa9c2daf0848ac14f76e68f36d0c20} each year. This is, perhaps, a problem in the making. Our seals are popular with visitors, one of the reliable things they can see on the various boat trips, hauled out on Black Rock when the tide is low or just an inquisitive head popping out of the water.

On land they are cartoon characters as they flop from space to space trying to get out of the water or make themselves comfortable. This is extremely difficult when you have little in the way of usable arms and no legs. Back in the water though they become the ballet dancers of the sea, sleek aquatic predators designed to catch fish on the move. A thick layer of blubber insulates them from the cold and they are long lived – 40 plus years. They give birth on land and grey seal pups remain on a land ‘nursery’ for about five weeks being fed by their mother before entering the sea and learning to fish for themselves.

Seals tend to stay close to land. They are, after all, mammals and raise their children on rocky ledges. Dolphins, however, while also mammals, spend all of their lives at sea. There are over forty species of dolphin in the world but, as far as we are concerned, we are only likely to see two sorts – Bottlenose and Common.

There are three other species in UK waters though, Striped, White Beaked and White Sided. These are seldom seen close in to shore and the one that is most likely to pop up locally is the Bottlenose, the clown of the sea. A pod of these took up residence in Porthcurnick bay a couple of years ago, but nothing very much has been seen this year. We are told by marine environmentalists that we should never bother these creatures by getting too close but my experience is that if they see you they will make a bee line for you and play ‘Last Across’ under your bow! 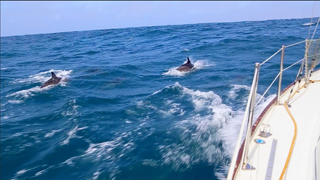 It seems impossible that you can avoid hitting them as they surface a couple of feet in front of you, give you a big grin, and then disappear – to pop up again with a swirl on your starboard side. I remember one magical night, half way between Padstow and Milford, Lundy Light flashing to starboard when the dolphins came. For half an hour they played around us, the splashes of their dives lit up by the phosphorus in the water and then they got bored and disappeared as swiftly as they had come.

Not all dolphins are as friendly as these though. The species includes Orca, the Killer Whale. All dolphins are carnivores but, while the smaller dolphins content themselves with fish, Orca attacks other dolphins, seals, sharks, penguins and whales – in fact anything that swims. Except, it seems, humans. There is no record of a single attack on a swimmer anywhere in the world though there is a case on record of a group trying to tip over an ice floe on which men stood with dogs.

Did they want the men or the dogs? Another time a snorkeler found himself pulled in to a steep dive as an Orca had grabbed his fishing bag containing his catch. He was still attached to the bag! Still, these are huge mammals and, though people have swum with them unharmed it is best to remember that this is a five ton creature which can swim at many times your speed and Mum might take exception to your close inspection of her calf. They are highly intelligent and hunt in packs, prepared to tackle even the dangerous sharks and the giant whales. They are about in our waters but are more common on the North Coast. 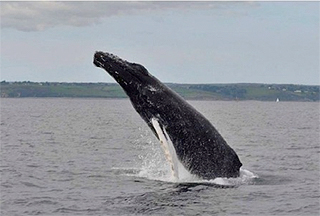 Which brings me to yet another mammal, the whale, part of the same group, cetacean. We have whales in our local waters though they are usually far out at sea. Early this year, however, a large humpback – named Doris- spent some weeks along the Devon and Cornish coasts, finally settling in Falmouth Bay for several days, getting into all sorts of mishaps and adventures.

In Torbay she became entangled in fishing pots and had to be rescued by RNLI who cut her free. Then, moving down the Coast she got caught in fishing nets at Slapton and was again rescued, by RNLI and local fishermen. It took three hours to cut her free, she was exhausted and in danger of drowning, but they succeeded and she moved off again. She did not show locally here in Portscatho but gave us a miss and went to Falmouth where she stayed and entertained the visitors, breaching (jumping clear of the water) sometimes several times in series.

Why do they breach? No clear answer, only theories. Perhaps the great thump when they hit the water dislodges sea lice and things, just like a dog scratching to get rid of fleas. Whales don’t have arms so they cannot scratch! Perhaps it is to allow them to breath clear air undisturbed by water or water vapour. Another thought – a form of communication as the thump when they land can be heard for miles and the sound would travel even further underwater. It is common for some whales, humpback is one, to hit the water with a fin making yet another noise. Nobody really knows nor are we likely to until we learn ‘whale speak’. 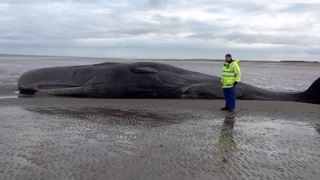 Whales can be dangerous and there are several cases of them hitting small vessels and sinking them. It may be that this is not with the intention of deliberate harm, perhaps just an accident, but a blue whale weighs over 100 tons and is as big as a Boeing 737 so even an accidental nudge by something like that will make a severe dent in a 35ft yacht!. Imagine being in the way of a flip of the tail!

The biggest problem faced by whales close inshore is that they go aground. If they are moving forward when they hit the sand their impetuous will push them so far up that, if the tide is dropping, they cannot get off. They are in serious trouble as their frame is designed to be supported by the surrounding water, so remove that and internal organs can be damaged. If they survive then when the water comes back their struggles move them even further up the beach.

Last year a big sperm whale was stranded on Hunstanton Beach in Norfolk, the sixth casualty of the year. The 30-ton, 45ft casualty could not be saved and died giving the Local Authority the whale of a headache! They were fortunate the body was on an accessible beach so could be reached by dumper trucks, but accessibility cannot be guaranteed. As the body has to be cut up, usually by abattoir workers, and then moved in lorries this is a serious problem. Imagine such a thing on Porthcurnick! 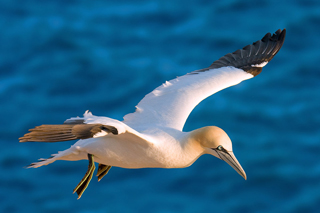 But let’s be more cheerful. There is always the chance of seeing something from our Lookout even though it is most likely to be a seal. Then, for the birdwatchers, we have a goodly supply of avian visitors from the ubiquitous gull to the shag, cormorant, and fulmar. There are gannets on Gull Rock so, if conditions are right, you might be treated to the spectacular dive-bombing as they chase the mackerel shoals. On land we have a rich variety while, in the early summer, you may see the Eider and Great Northern Diver paddle past. So, even on those quiet days, perhaps with rain, there is usually something to watch. We need more of you to do the watching, though, particularly as we have just started to cover Tuesdays. It is a worthwhile, satisfying task, even if, when you go home and pass the swimmers and kayakers, all you can say is, ‘Well, someone was looking out for you.’

Just as I finished this article news came through that the Princess Royal has agreed to become Royal Patron of the National Coastwatch Institution. This is a great honour for the Charity and is recognition of the sterling work by our 2400 trained volunteers who run the 52 Stations around the English and Welsh Coastlines. Since the beginning of this year over 300 incidents have been recorded by our Stations in which Watchkeepers have alerted the Emergency Services to someone in trouble. Locally we need more volunteers so our hours of coverage can be extended. Do give us a ring to see if you can help: 01872-530500 for, Sue or 01326-270681 for Chris.

Pictures from Wikipedia and personal stock