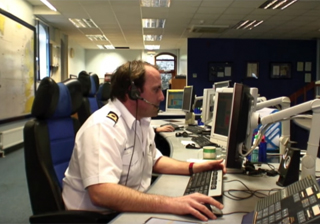 At our last meeting we had a talk from Paul Bagnall, the new NCI Liaison Officer of HM Coastguard. I know that is the wrong term and that they are officially MCA Falmouth, but, as a very senior citizen who is too old to change his spots, to me they are Her Majesty’s Coastguard. It sounds so much better. On reflection, if I want I want to be consistent in my hatred of new terminology, I should eschew the ‘senior citizen’ bit. Reminds me too much of the French Revolution!

However, to get back to the point, it was a most interesting talk covering their work and the continual changes brought about by the evolution of electronics. We have known for some time that Falmouth is equipped to monitor and arrange assistance for maritime incidents around the world. Their ‘local patch’ covers the Western English Channel, the southern half of the Bristol Channel, and stretches half way across the Atlantic.

What I think his talk really brought home to us was the fact that it can get pretty hectic in their Control Room with many things going on at once. As we monitor our radio on Channel 16 we usually hear of any local incident on either of our coasts. We cannot know, however, if they have a problem with a tanker off the Falkland Islands or a fishing vessel in difficulties down near the Azores. The staff in the MCA at Falmouth are each watching several ‘T.V’ screens and listening to more than one radio channel. So his message to us was, ‘Be brief with routine calls to them and please forgive them if they seemed somewhat short’. 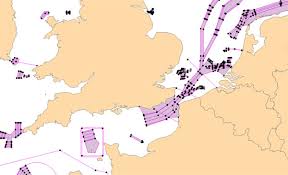 Among their responsibilities is recording the passage of vessels through the Separation Lane at Lands End. There are several of these lane systems around the British Isles, notably off Lands End and the Isles of Scilly, Anglesey, St David’s Head, the Mull of Kintyre and Ushant but the grand daddy of them all is the narrow section of the English Channel.

These are all places where navigation is restricted by adjacent landmass, forcing all deep water shipping into a confined channel. What you then have is a situation similar to a busy motorway in the rush hour – too many vessels to fit at random into the available space. Some order has to be imposed else chaos would reign and collisions be inevitable. The basic principal of all Separation Lanes is the same as a motorway, though, of course, there is no physical central reservation. There is a centre section about two miles wide, into which ships traversing the Channel end to end must not stray. Remember these days they are all navigating on what a motorist would call ‘Sat Nav’ so they know exactly where they are. Overtaking is permitted providing the vessels remain in their correct lanes and the Rules of the Road are strictly observed.

Very large ships are involved and can be difficult to manoeuvre. They may be 318 metres long (about 350 yards in English) and 42 metres or 45 yards wide. They will be travelling at 24 knots or 35 mph. That is a lot of ship travelling faster than road traffic in a built up area! They may take several miles to come to a halt as ships are not fitted with brakes. The only way they can reduce speed mechanically is to go full astern, an operation, which is very unpopular with Chief Engineers as it puts immense strain on the machinery.

In the Channel the situation is further complicated by the cross channel ferries, which will be travelling at up to 42 knots which is approaching 50 mph. The Port of Dover handles about 120 ferries each day in summer. Add to that fishing vessels, small merchant vessels, yachts and pleasure vessels – I give up: sufficient that you can see the need for strict control if major disaster is to be avoided. All vessels crossing the Channel have to cross the Lanes at strict right angles. All vessels over 300 tons have to report to Dover Coastguard if they are traversing the system. 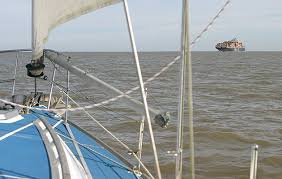 So far as we are concerned at Pendvaden we have nothing to do with these Lanes as the nearest to us is between Lands End and the Isles of Scilly. However we are all interested in what goes on at sea and would not be doing the work if we were not. Many times we are on watch on a quiet day and all we can see, far out on the horizon, are the big ships going about their business.

We don’t bother with them. Our work is concentrated on the ‘leisure industry’, the swimmers, kayaks, yachtsmen, walkers etc.; all those people who may get in to difficulty, usually through no fault of their own. Other NCI stations, however, find that big shipping plays a much larger part in their lives. Gwennap Head and Cape Cornwall for example look out on to the main shipping lane and are frequently asked by the Coastguard what they can see or, perhaps, to keep an eye on a situation and tell the Coastguard if it appears to be getting more serious. The appointment of a specific Liaison Officer with the NCI is an important step, recognising the fact that the work we do we has a value to the Coastguard and we can work together. 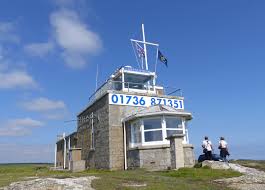 We are closed now but in our last operating week the weather had a good go at us and blew away our big notice board. This prompted me to check on our recorded wind speeds and look them up on the Beaufort Scale, which, you will remember, was devised by Francis Beaufort, a Royal Navy officer, who later became an Admiral. He was not the first person to have the idea of a Scale of wind strength. Daniel Defoe was amongst the early researchers and, in 1704, actually produced an eleven point Wind Scale. His idea did not really take off and it was Beaufort who put the whole thing together in 1806 and brought it in to use with the Royal Navy.

That Scale differed from todays in that it was a thirteen point Scale. He revised it in 1831, and dropped it to the present 12 point Scale. Remember it was designed as an aid to sailing men-o-war which were square rigged hence he looked at the effect that wind strengths had on the sails they could carry. Force 1 was just sufficient to give steerage way, then 2 to 4 a ship could carry all plain sail and make up to about 5 knots in a strength 4. From Force 5 to 9 she would steadily have to reduce sail, bringing in her royals, the highest sails on the ship, and starting to reef her Topgallants, then her topsails, increasing the reefs as the wind strengthened. By Force 10, a whole gale, she would be reefed right down and by Force 11 she could only carry storm sails. At Force 12 her canvas would be stripped and she would lie a-hull, possibly with a jury rigged fore and aft sail simply to keep her head to the wind. 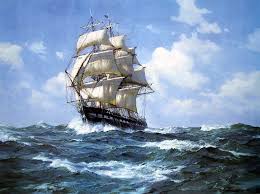 So the Scale remains today save there is an interesting point that, while the official guardians of the weather the Royal Meteological Society call Force 9 a Strong Gale the Met Office calls it a Severe Gale. Apparently they thought it was a better description, so it is used in the Weather Forecast and in most Nautical Almanacs.

As you might expect others have come up with variations of the Scale, some to suit their particular needs and some simply humorous. Small sailing dinghies cannot be compared with Nelson’s ships of the line so, in about 1970, the Heron Dinghy Class came up with one more suited to their postage stamp sails. It only had eight points as it was deemed unlikely that 14ft dinghies would sail in storms and hurricanes. The dinghy had a crew of two and, as they are so light, in a wind they sit so as to balance the boat against the wind force. This Scale dictated where each should sit according to the wind strength.

Michael Green wrote a wonderful book called ‘The Art of Course Sailing’ and in this he set out the Course Sailors Scale. It included such gems as ‘Force 2 – Tea Towels blow off the rigging, followed by ‘Force 3 – Difficult to make tea underway’ then ‘Force 7 – Course sailors get rescued by launch’ and ‘Force 9 – Course Sailors in Pub.’ 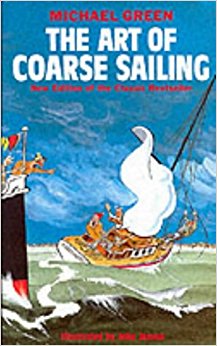 It must be that because we live in this unpredictable weather pattern we are able to laugh at our wild meteorological mood swings. Certainly if you decide to join the NCI you have to be able to take the rough with the smooth. One day you may have to battle your way along the cliff path, clutching your hat, the rain driving in your face, thinking ‘I must be mad to do this!’ The person on watch next afternoon will bask in the hot sunshine, looking out at a smooth sea in a gentle offshore breeze, logging the paddleboards and kayaks as they pass beneath him. We have never denied the fact that watches can be boring, wet, not very warm on some days – yet, even on that day, the situation may change. The Coastguard may phone asking if you can see something. Your day is transformed, you are needed, someone may be in trouble. It may be coming on to rain as you lock up – but you walk back feeling deeply satisfied.