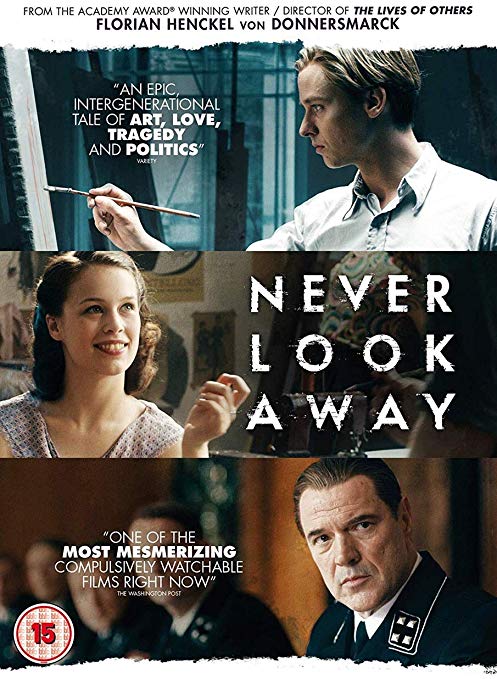 In post-war East Germany, Kurt Barnert (Schilling), haunted by the disappearance of his aunt Elisabeth during the Nazi regime, is a student at the Dresden Academy of Fine Arts, where he falls in love with fashion student Ellie Seeband (Beer). Their relationship comes under scrutiny from her father, Professor Carl Seeband (Koch), who worked as a gynaecologist for the Nazis during WWII.

Kurt and Ellie decide to flee to Western Germany. There, Kurt is able to attend the modern art academy in Dusseldorf, where his talent is recognised, but he struggles to find his voice after years of living under the restrictive conditions of the Nazi and GDR-regimes until receiving inspiration from his enegmatic tutor (Masucci).

OK, so it was with trepidation that I sat down to watch what I thought would be a three hour over-indulgent biopic loosely based on artist Gerhard Richter’s life… how wrong can a man be? Instead I was transfixed for the entirety. Yes, it’s slow, but the story is intense and the acting excellent so the time flew by.

The story flips back to keep the story moving forward and although sometimes slightly irritating, it’s entirely worth the journey and helps tell the story in much more depth than an average Hollywood film would.

I can’t recommend this enough, even if you’re not particularly an art fan. It’s a smooth gratifying treat like a never-ending box of Maltesers and wholeheartedly worthy of the multiple nominations (including 2 Oscars and a Golden Globe) it received.

Verdict: Don’t be put off by the length… it’s worth every moment of your time. ****

This film will be shown at The Harbour Club, Portscatho on Tuesday 7th January