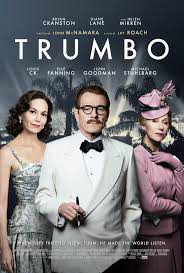 In 1947, Dalton Trumbo (Cranston) was Hollywood’s top screenwriter until he and other artists were jailed and blacklisted for their political beliefs. This film recounts how Dalton used words and wit to win two Academy Awards and expose the absurdity and injustice of the blacklist, which entangled everyone from gossip columnist Hedda Hopper (Mirren) to John Wayne, Kirk Douglas and Otto Preminger.

In his 1st serious feature, after The Campaign, Dinner for Schmucks & Meet the Parents, Jay Roach directs a successful account of this dark Hollywood era. And although Cranston presents a convincing characterisation of Trumbo, the real star of this feature is our own brilliant Helen Mirren as the venomous Hedda Hopper.

This film will be shown at The Harbour Club Portscatho on Monday 20th June.