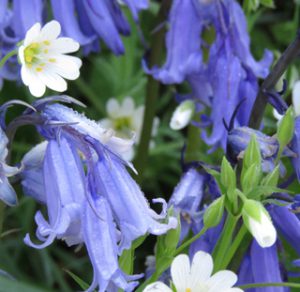 Though visitors and locals alike may rue the rain that falls on a bank holiday, Nature celebrates its arrival and thrives. You can see the change in a matter of hours, when our rapidly drying land soaks up the moisture and everything becomes instantly more vibrant, with fresh growth shooting up all around. It never fails to lift the spirit.

Floral growth in our hedges is in constant transition; the race to flower and set seed for the next generation is well underway. Early purple orchids and bluebells are already fading away; the blossom of blackthorn has given way to hawthorn; the confetti of starry stitchwort, 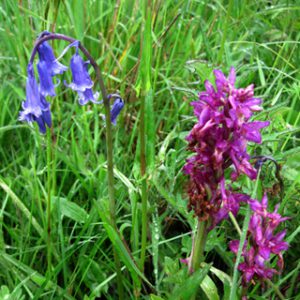 among acid green alexanders and lurid pink campions, is already blowing away leaving behind tiny seed pods; the spikes of foxgloves are opening to receive the bumbling attention of bees, while the white froth of cow parsley rises up, billowing along the roadsides with every passing vehicle in the warm sunshine.

However, there are hidden battles going on within all this stunning floral display. Not all this stunning abundant growth should be so welcome. Some of the most dominant plant species currently taking over entire hedges are not native, threatening our true native species with local extinctions. Of particular concern are the Spanish bluebell and three-cornered leek, and now is a good time to remind readers about the differences between these and the native species that need protection. 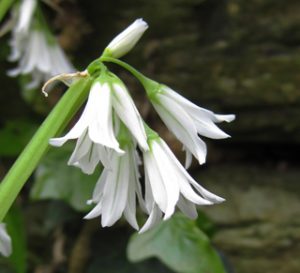 Three-cornered leek (Allium triquetrum), pictured here, is often mis-named wild garlic. However, we already have a native wild garlic (Allium ursinum), which can be easily distinguished from three-cornered leek. Essentially, three-cornered leek, which was introduced to Britain from the mediterranean region of Europe, has white flowers that dangle down from a central point at the top of a distinctly three-sided stem. The leaves are long and strappy, rather like bluebells, but having a distinct keel on the underside. The leeky stink from a stand of plants also identifies them.

Native wild garlic displays an umbel of starry flowers standing stiffly erect from the top of a rounded stem that is surrounded by broad, ovate leaves (pictured here). 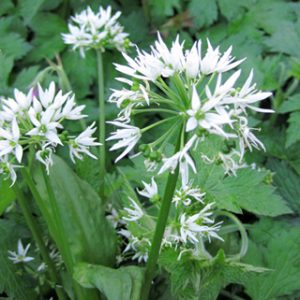 When the leaves and flowers are crushed they smell distinctly of garlic. Both wild garlic and three-cornered leek can spread rapidly if left unchecked, taking over an area of habitat as they outcompete other plants. Veryan churchyard and surrounds provide a very good example of the two species competing side-by-side; it is more usual to find single species patches across the Roseland.

Three-cornered leek has become the aggressively dominant nuisance in many of our hedgerows, blocking out opportunities for native flora such as bluebells and orchids that would otherwise thrive there. For similar reasons it has also become a target for eradication in other countries around the world, even as far away as Australia. All parts of three-cornered leek are edible, so I would encourage you all to dig up and consume (or destroy) as many as you can! You can use three-cornered leek in place of any onion used in a recipe; there are plenty of good suggestions online. Other methods of eradication include constant strimming to weaken and slowly kill the bulbs and preventing them setting seed, or spraying with glyphosate or other chemical control.

The other invasive plant that is causing increasing concern in our landscape is the Spanish bluebell (Hyacnthoides hispanica). This plant was introduced to British horticulture as early as the 17th century. The native British bluebell (Hyacinthoides non-scripta) is potentially threatened by the ability of the Spanish bluebell to hybridise with it, producing fertile offspring. The first UK hybrid bluebell (Hyacinthoides x massartiana) was identified in 1963. It is important to identify the differences between all three types of bluebell in order to understand the degree of threat that hybridisation poses. 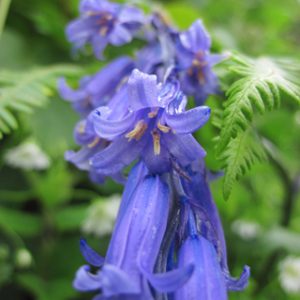 Native bluebells produce delicate deep blue-purple flowers that dangle on one side of a bent stem; the flowers have cream coloured anthers and give out a strikingly beautiful scent that can be easily detected when standing near a large group of the plants in springtime. They are most abundant in woodland settings, but in the Roseland they also grow well in fields and hedgerows; they even survive on exposed cliff tops, such as Nare Head.

Spanish bluebells (pictured below), by contrast, produce showy, abundant, pale blue hyacinth-like flowers all around a tall, stiff stem; the flowers are not scented and have blue-green anthers. 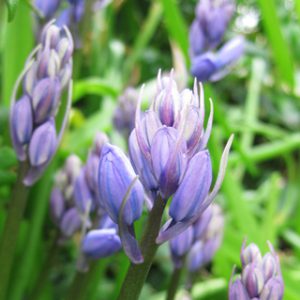 Hybrid bluebells may show the characters of native and Spanish bluebells; however the tendency is towards the Spanish type, with light blue flowers that lack scent and have green-blue anthers within the petals.

All three types of bluebell can freely interbreed. In scientific terms, a species is usually determined by its inability to breed and produce fertile offspring with any other species. However, there are now many examples in nature where this species rule is undermined. The separateness of Spanish and British bluebell species is therefore still a matter of scientific debate. So perhaps one of the greatest threats to our native bluebells and the other wild flowers of the Roseland is currently the three-cornered leek. 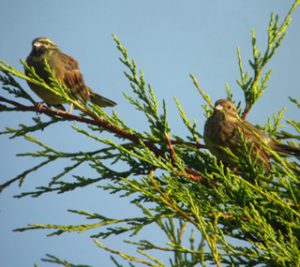 This year we have plenty of work to do but less people to do it. Nevertheless, using a slightly modified method for surveying our breeding population, we have so far notched up 39 territories of which 21 have confirmed pairs. By this time last year we had recorded 42 breeding pairs, so with less recording input we are probably doing at least as well this year as we did last year. Only time will tell, but we hope to have found around 60 breeding pairs by the end of the breeding season.