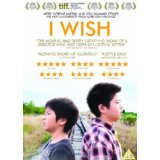 In this beautiful Japanese film, Ryu and Koichi are brothers who have been separated by divorce: stoic, grounded 12-year-old Koichi lives dutifully in coastal Kagoshima with his mother and grandparents, while 10-year-old tearaway Ryu is living it up with his deadbeat musician dad in urban Kyushu.

Meanwhile, the Kyushu train line connecting these two cities is nearing completion and Koichi hears a rumour that when the first two trains pass each other a miracle will occur and wishes will be granted to all those who witness it. With this in mind the brothers set out with a plan to reunite their family.

Although somewhat drawn out and slow to get started, you’d be missing something by letting that interfere with your enjoyment of this touching film. Role reversals see the children acting more like adults and their parents and grandparents rather childishly. It’s hard to understand if the cultural differences are to blame for some of the more unrealistic acts by the children, but regardless, it’s a delight to watch these children act both well and naively at the same time.

Verdict: A delightful and charming tale of innocence infused with a reflection on the way we act as adults. ***

This film can be seen at The Harbour Club, Portscatho on Tuesday 18th June. To see trailer, click here