I wanted to start off this column with a short tribute. Many of you will have known Mike Harrison, who farmed at Churchtown Farm in Veryan. Mike sadly and suddenly passed away in January, as it happens, on my birthday. Mike was the salt of the earth, a kind man, and who despite a crippling accident some years ago, would do whatever he could for anyone. Versed in so many things, he was my “first thing in the morning” buddy at Veryan Shop, offering us generous advice, encouragement, sharing experience and generally having a good old laugh, particularly about the pathetic hoot emitted by the horn on his 3 wheeler bike, which was his lifeline after his accident. We swapped plants, produce, thoughts and nuggets of  wisdom and despite the fact he also sold veg outside his farmhouse, bore no animosity to us starting out. He allowed Cornwall Wildlife Trust to set up a wildlife-friendly meadow on some of his land, which we hope will continue, and will forever be known as Mike’s meadow. Mike will be missed by so many people. I just hope St Peter upped his fags and booze order before Mike arrived, or there will have been some trouble. RIP, Mike. 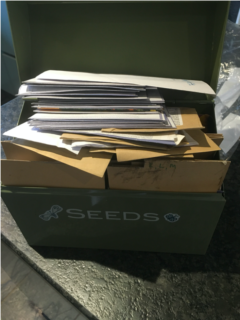 And so here we are again, lockdown 3.0, and safe to say, everyone really feeling it this time, me included. So much harder to be cheerful and positive when the weather is gloomy, but I’ve had that “get a grip” conversation with myself and am planning what to do over the coming few months. If you’re feeling gloomy, grab yourselves some seeds and set them off. The promise of things to come will lift your spirits no end. How many is too many by the way? And this is only half of them…..

The first job for me was to reassemble the heated propagator, in readiness for the first seed sowing of the year – chillis and peppers. These were something I took my eye off a bit last year, so I didn’t give them the conditions they needed early enough.

Being a creature of hot climes, chillis and peppers need a long growing season in our climate. The hotter the chilli, the longer it needs to mature and develop its full potential so now’s the time to get going. Ideally, these seeds need heat underneath to get going. Some start them simply on a wet piece of kitchen roll by a warm radiator- it works. But if you’re not allowed to start things growing in the house, invest in a heat mat. An economical and adaptable source of heat which you can put under any bog standard seed tray. A source of heat under things is a great springboard for many seeds, even if they don’t typically need heat to germinate. We planted our flowering stocks a couple of weeks ago, popped them in the propagator, and the first ones were up after 2 days. It really moves things along.

Heat is really useful also for tomato and aubergine seeds, both of which will be planted in the next week or two. 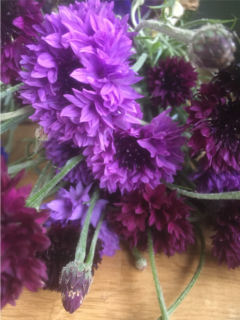 We’re expanding our cut flowers production this year, and will use heat to speed up germination, but  there are many flower seeds you can sow under cover now which don’t need heat at all. Cornflowers, nigella, and calendula, ephemeral as they look, are as tough as old boots and will germinate now. Similarly, helichrysum (paper or everlasting flower) and antirrhinums (snapdragons) are surprisingly tough. Get a few going and give yourself something to look forward to as well. They are great for kiddies too, as they are so easy to grow.

Outdoor jobs are difficult at his time of year, but getting outside even for half an hour can make a big difference to your mood. Carry on with your winter fruit pruning (all but the stone fruits) when the weather allows. We have a few weeks, but remember that once the sap starts rising, your plant is no longer dormant and you run the risk of introducing disease via the pruning cuts. Get on with it, in short. That especially applies to grapes, which bleed even earlier than most. Aim to prune these in January, provided it’s not a frosty day or night. 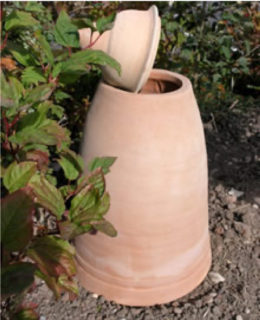 For a early fruit crop, you could cover up your rhubarb to encourage some forced stems – the resulting fine, pale stems are often the sweetest. I don’t have a forcer, but use the largest terracotta pot I have, upturned and with the drainage hole blocked to exclude light. Do check regularly, as slugs like to congregate beneath, but can soon be turfed out.

I am also dividing herbaceous plants like fury and making new ones to spread around the garden or to give away. This is the perfect job to do while the ground is wetter but relatively warm still, because the plants will come out more easily and start forming new healthy roots quickly once repotted or replanted.

With any of these outdoor jobs, don’t walk too much on wet soil. As well as being unpleasant, it damages the soil structure, and leads to compaction in the summer months when it’s drier. Best leave the job a day than make problems for yourself in later months.

Hopefully you are doing all this with your newly sharpened and cleaned tools…..? If not, get to with sharpening and cleaning them. Using poor cutting tools is tantamount to cutting your hair with blunt scissors. It’ll look awful, damage the plant and be much more difficult.

Talking of which, I’m off to the bathroom to attempt my first home fringe cut since my Mum used to do it when I was a child. The lockdown kicked in one day before my last appointment. My scissors are sharp, but I’m not expecting very good results. Good job I own several hats.