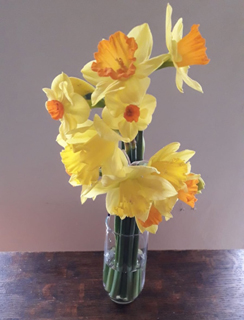 So are we up to Ellen now?

This month has felt like the most depressing month for gardeners for a very long time, as far as the weather is concerned. Ciara, Dennis, Ellen, call them what you like; it has been an almost endless cycle of high winds, teeming rain and violent hailstorms. Almost the worst part about this is that because the preceding winter has been so mild, many of our beloved spring shrubs and bulbs are well ahead of where they might usually be, and their growth is what we call “soft”.

This means that the growth rates have been early and good, but because they has not been exposed to normal winter temperatures – at least a few frosts – that growth has not been controlled in the normal way, and has not toughened up. Shrubs are full of bud which can easily be knocked off by strong winds and hail. Your camellia flowers have probably either blown away or are horribly marked by the rain. Our snowdrop blooms have most likely already been and gone. You will probably be cutting your daffodils to bring indoors because they have snapped off (not such a bad thing…)

I read this week that spring had officially arrived in Cornwall because the bellwether magnolia trees had their requisite 50 plus flowers open.  They might be quite short-lived. And thank goodness the annual jamboree that is the Bosvigo Hellebore Day took place last weekend, on a reasonably clement day, because this year, hellebores are exceptionally tall and fulsome. This however makes them most vulnerable to this weather and the flower spikes will be damaged. I don’t know what name the meteorologist have chosen for the next storm, F, but if we see it in the next few weeks, I will have my own version, and I might have to hyphenate two words…… 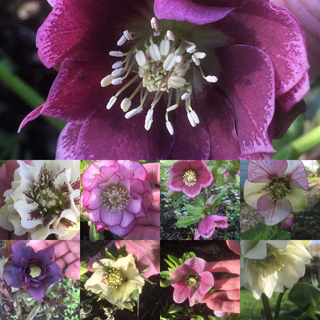 So, given that we can’t control any of this, what can we be getting on with? Hopefully we all have access to windowsills, and if we’re lucky, a potting shed or a greenhouse. This means vegetable seed sowing can begin in earnest!

Chillis and peppers should already be in and germinated – they need the longest growing season of all, so unless you can provide some heat underneath to ensure fast germination, you’re probably too late to get anything like a decent crop trying to row these from seed. Wait a few months and buy a ready-grown plant to be sure of a crop this year.

It’s not too late for tomatoes though – in fact, I haven’t put a single one in yet –  so get going as soon as. A couple of seeds in each pot of compost, put them on a bright windowsill, preferably with a radiator close by, step back, and be patient. In a few weeks you will have new life.

The windowsill in my conservatory is completely covered in chitting potatoes ready for planting and there is still plenty of time to buy and chit yours, if you haven’t done so yet.

Certainly, get your first earlies sooner rather than later as they are the first to go in. You should be finding summer onion and shallot sets in the shops now too. However, in both cases, be mindful of the soil conditions. It is easy to get overenthusiastic and get them in too early for the current conditions. If the soil is too cold, or as is more likely this year, too wet, your spuds and onions will rot and get rust respectively, and all your effort will be in vain. 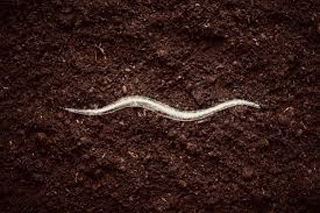 I for one will also be administering nematodes on my potato patch in an effort to mitigate the effects of wireworm and slug damage. Nematodes are a totally natural method of pest control as they live in your soil anyway, but are needed in greater numbers than normally live there to control any build up of wire worm and slugs. It’s just a bit unnerving having them in your fridge for a while before applying, which you have to do because they are living creatures. Just make sure they are well labelled, in case your other half comes in from a night out a bit peckish…..Ugly little devils, but they get the job done.

My leeks are just poking their little heads through – another good one to get going early, and the first swathes of peas and broad beans are doing very nicely, thank you. My peas and beans have been kept well out of the reach of our furry friends, as they are out in force in this nasty weather, because our usually reliable neighbours’ cats are being derelict in their duties in the wet weather. Either cover your seed trays overnight, or again, keep them indoors away from the blighters, because the one night you forget to cover up the seed tray in your greenhouse is the one night you’ll lose the lot. it is just as they are germinating that they are most at risk. Something about a release of energy makes them doubly appealing. 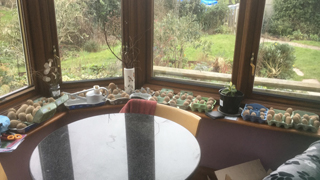 And don’t forget salad leaves and lettuces. These germinate reliably all through the cold months and even if you don’t want to grow much, keep a few come and come again pots on your windowsill and you’ll be surprised at how readily and quickly they rejuvenate in between cuts.

On the flower front, everybody loves a cornflower or nigella (love in a mist) or poppies so if all else fails, throw a packet of seeds in a tray or two now, and you will be amazed at how quickly they germinate. They don’t need any fancy conditions – just good light – and before you know it, you’ll have the beginnings of a cut flower garden.

Let’s hope by next month, the weather has settled, and we’re not any further along in the storm alphabet, otherwise I am going to have to make up a whole new raft of swear words. Keep warm!