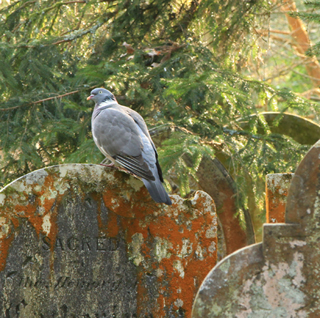 The great cycle of life, from conception to death and decay, is nowhere more stark than in a graveyard. Yet an inspiring garden exists in a Roseland churchyard, that reminds us we are part of the cycle, and that decay is merely part of a constant and transient process of rejuvenation, supporting life in all its forms.

The church of St Just in Roseland sits in a sheltered valley beside St Just Creek, where the microclimate is favourable to the cultivation of frost tender species. Thus in the 19th Century, John Garland Treseder created a nursery garden on a plot of land adjacent to the churchyard, after returning to his native Cornwall from Australia where he had run a once successful horticultural business for many years. 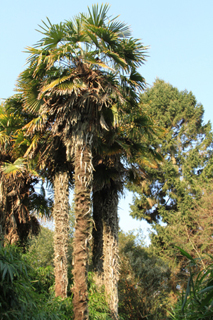 Treseder planned to start afresh at St Just, importing tender plants from Australia, which thrived in the frost-free conditions. However, things did not work out as he had hoped, and the garden was taken on by my great uncle Frank Collins of Portscatho in 1925, who managed it until after the Second World War.

The Church subsequently took back the land in order to expand the burial grounds into the garden, which continues to be carefully and mindfully managed as a place of rest and tranquillity for the living and the dead. The churchyard consequently contains a rich mixture of very mature subtropical plants, as well as pine, fir and deciduous trees. Toweringly tall Trachycarpus palms, magnolias, camellias and rhododendrons create a breath taking canopy above dappled shaded glades, criss-crossed by the many paths and terraces exploiting the sloping aspect. 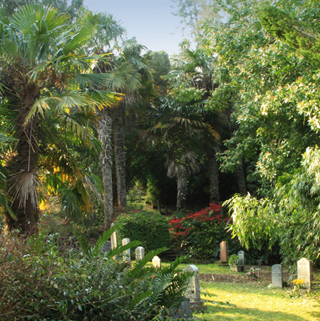 The canopy provides a safe haven for high-nesting birds, as well as song perches exploited by broadcasting finches, warblers and cirl buntings. In the shrubby understory there are endless secret shady havens for thrushes, titmice, and warblers, who hunt for plant material or invertebrate prey in the bark of trees and the rich, moist soil. As the breeding season advances, there is birdsong everywhere; flippy-winged dunnocks vie with robins, trying their best to out-sing rivals and attract potential mates; pied wagtails busily flit, bob and ‘chi-chiff’ about in the open walkways, while little wrens trill impossibly loudly and miniscule goldcrests shyly canticle like tiny tinkling bells.

Water features provide resources for amphibians to shelter and reproduce, in rills and ponds and the bog garden, which is spectacularly dominated by the giant rhubarb gunnera, later in the year. The church itself and surrounding buildings provide shelter and breeding sites for bats that hunt for moths and other night-active insects, while the lowert lych gate has been known to house swallows during the breeding season. 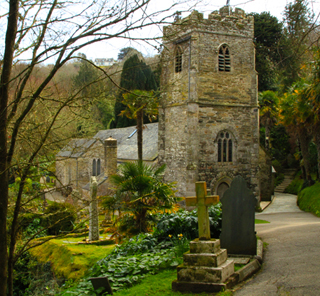 Spring brings an emergent successional eruption of native and non-native flowers over graves and along pathways. Early primroses follow snowdrops; bluebells will be at their best from late April onwards in shaded places, with frothy cow parsley and red campion brightening up hedgerows and sunny corners. Fresh bright greens of ferns and bryophytes light up the darker corners, along with colourful and abundant lichens across headstones and rocky features.

Although there is much invasive, non-native 3-cornered leek (often mis-named garlic), this plant at least offers opportunities for butterflies, bees and other pollinators. At the time of writing, the gardeners were strimming these plants in some areas, which helps to control their spread, but the stench of onion rises heavily into the air for a time. All parts of the plant are edible, with the flowers making a flavoursome addition in salads. 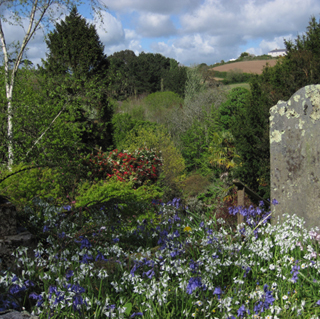 As spring advances, some of the larger specimen shrubs – azalias, camellias and, later, hydrangeas – put on a further colourful show for pollinators. Night-scented plants draw in moths and the bats hunting them.

Walking out from the churchyard towards the pool and boatyard, there are more nature rewards to enjoy. In the church pool you may see mute swans and mallard. Follow the coast path that skirts the tidal creek towards St Mawes and you may still see little grebe diving and bobbing, as well as cormorant, shag and duck species. Herons and little egrets hunt at the edges of the water, along with gulls and the occasional small wader. 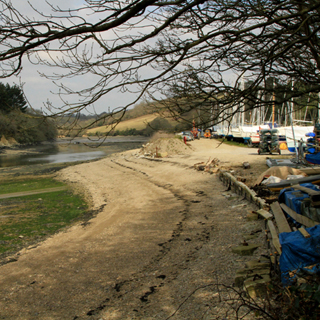 Leaving the boatyard and rejoining the coast path throgh a gate opposite the last-but-one house before the fields, you are very likely to hear and see the cirl buntings that have particularly colonised Churchtown Farm since the species was first reintroduced to the Roseland. This area was the last place in the Roseland where cirls were known to exist, and the reintroduced birds naturally found their way here from reintroduction points further east. Today their songs can now be heard from Lanzeague above St Just Churchyard, all the way to St Mawes as the population continues to grow, expand, and re-establish itself.

If you decide to expand your nature walk along the coast path to St Mawes, a distance of around 2 miles, listen out now for the summer migrant birds such as whitethroat, that should be joining more resident species, including bullfinch for the breeding season. At the same time, keep a look out over Falmouth Bay for Dolphins, Harbour porpoises, seals and marine seabirds.

We are simplifying project recording this year, just counting pair numbers as we come across them this breeding season. We are no longer checking nest sites for fledging success or failure, as many previous years of monitoring data are now allowing us to extrapolate population trends. Stuart Croft has moved his cirling duties to Devon, leaving me in charge. I will be aided by regular volunteers. At the same time I will be working on the National Cirl bunting Survey for the RSPB, particularly covering the Roseland, while Stuart covers the much greater area of south Devon.

One of the original ringed birds, a male, has a new friend! He was joined by a ringed female in late March, who was hatched last year on the Lizard. She flew out west for a time, and then flew all the way to Nare in just a few days where she discovered the loan male. She is probably too young to breed this year; 2 years is normally the earliest that choughs begin to breed.

The first swallows were probably seen in the Roseland at Commerrans farm on March 20th, assuming earlier records have not been reported. This would appear to be at least a week earlier than in previous years. Keep a look out for them over Rosleand skies as they travel northwards or, hopefully, settle here for the summer.

Something to do this month in the garden 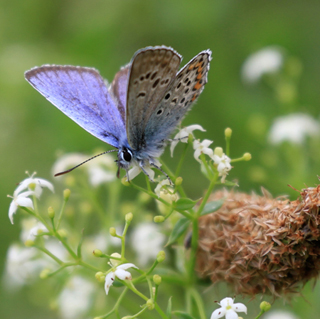 Wildlife charity Butterfly Conservation is calling on gardeners to help learn much more about the UK’s garden butterflies. Surprisingly little has been researched about them, so the Garden Butterfly Survey will attempt to establish the latest declines and increases in species populations; how climate changes affect them, what food plants they prefer and the best size and location for a butterfly-friendly garden. Takng part is really easy. After registering on Butterfly Conservation’s website, you simply log online all the species that have visited your garden: how many you saw and when you saw them. You need to check your garden for butterflies at least once a month in reasonable weather, although you can submit records as often as you wish.