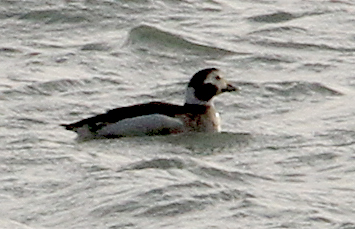 The Roseland winter has, like much of the rest of Cornwall, been characterized by relentless days of grey skies, wind and rain. Nice weather for the female Long-tailed duck (Clangula hyemalis) still bobbing about in Gerrans Bay in late January. For us land-based mammals, the endless days of cold and wet have proved tedious and often frustrating for having to stay indoors. However, there are many species fitted for survival in all weathers, who can tough it out with ease where we would perish, finding shelter in basic resting places. I am a great admirer of gulls, as you may already know, but there is another species which I should like to celebrate. The Northern Fulmar (Fulmarus glacialis), once seen only in the far north of the British Isles, is becoming gradually more widespread around UK waters and can be observed here in the Roseland and other parts of Cornwall.

Fulmars look rather like gulls at a glance, with their mostly white bodies and grey upper wings with dark, outer tips. Closer study will reveal a shorter, thicker head and neck and a bluish nasal tube on top of the bill. In flight the wings are visibly longer and narrower than those of gulls; the legs are stumpier, not designed for spending much time on land. Northern Fulmars are in fact related to albatrosses, shearwaters and petrels. This order of birds, taxinomically termed the Procellariiformes, are commonly referred to as the tube noses, owing particularly to the physiology of the nostrils.

Furthermore, Fulmar flight behaviour, unlike that of gulls, is characterized by stiff, almost artificial-looking wingbeats; at cliff roosting sites birds have a habit of riding the updraught right up to the rock face before turning away without landing, in the face of vocal roosting colony mates. 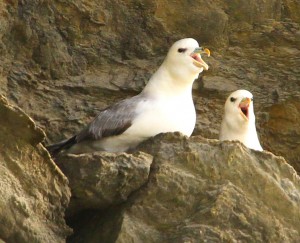 Cliff faces are favoured by Fulmar as colonial breeding sites, although they have been known to make use of flatter land features, even rooftops. They are said to overwinter at sea but in the Roseland you may see them even now, quite close to in the cliffs at East Portholland. Pairs mate for life and will return to their favoured nest site every year. Only one egg is laid per breeding attempt. Chicks are fed on a foul-smelling oily liquid comprised of fish, fish waste, carrion and crustaceans, regurgitated by the parents. The liquid can be defensively and effectively squirted at nest intruders and predators. It was this ability that earned the birds their modern name, derived from the old Norse for “foul gull”. 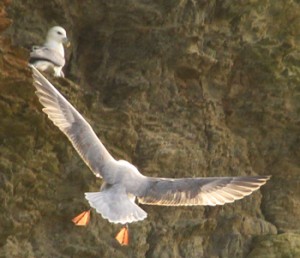 Fulmars, like their albatross cousins, are very long-lived animals. Although the oldest ringing recovery is just under 41 years, the typical lifespan is thought to be around 44 years, with some individuals anecdotally decades older.

According to Birdlife, the UK population of Fulmar declined slightly in the decade 1990–2000, while other, key European populations increased or were stable. The RSPB have given it a UK amber rating for the time being. However, the outlook for these beautiful birds is positive. If you want to see fulmars fairly close to, then the east cliff at East Portholland is a good place to observe and hear them.

I hope that some of you were inspired to take part in this January’s Big Garden Birdwatch survey, promoted by the RSPB. It is amazing what you may (and may not) see in the space of one hour out of the designated 48 in your garden. The choice of time to make the hour’s observations can make a big difference as to what is recorded. Many species are most likely to be seen either first thing in the morning or just before dusk, when they are seeking out their breakfast or pre-roost feed. This is not a hard and fast rule for all birds of all species but is a useful generalization. The weather was not the best for birdwatching when I did my hour but I did nonetheless see a Cirl bunting and a Firecrest, as well as my regualr pair of herring gulls and other, usual suspects. One notable exception was the absence of any blackbirds during the whole hour.

A curious fact (from the BTO)

Did you know that birds have bones in their tongues? Birds’ tongues contain 5 bones, collectively described as the “hyoid” apparatus. Birds only use their tongues to handle food and not to articulate vocal sounds. In fact avian vocalisation is under the control of the syrinx, a vocal organ not possessed by mammals which is located where the trachea divides into the two avian lungs. Birds use the syrinx to articulate a multiplicity of sounds all at once, including  the mimicking of other birds and sounds in their environment.