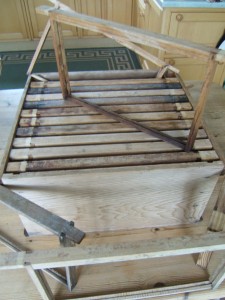 As I reported last month, the weather has not, in the main, been conducive to bees flying. However, we have had one or two drier days when the bees have been out and about and there are signs of increased laying rates from some of the queens by virtue of the fact that the bees are bringing in pollen – as well as taking the opportunity to make cleansing flights after having been cooped up for such a long time. This is always a satisfying indication that the queen (so far) has survived the winter weather – but it’s not over yet, even though the days are getting longer!

However, I’ve lost a colony in my orchard apiary due to what I believe will be proved to be Nosema, a disease of the gut – it was the swarm I collected from Grampound Road last year. The bees were not flying when other colonies were, so I took the roof and crown-board off to find a sadly diminished colony of just two or three hundred bees, though I saw their queen was still with them when they died . The colony had obviously dwindled through premature dying of the infected bees, meaning that the cold finally proved too much for them, because that number of bees is insufficient to provide enough heat to maintain the cluster. 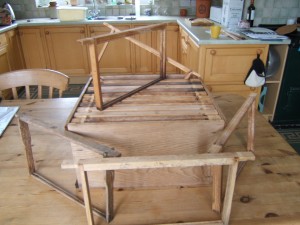 There was faecal staining on some of the combs (not surprising, bearing in mind the fact that the bees have not been able to get out and about to void their faeces for weeks, if not months).  So I collected the bees in a container and placed it in the freezer for later analysis and will treat the combs with acetic acid to kill any bacteria present. The combs can then be re-used in other colonies later in the season. In the bee shed there is always “maintenance” work awaiting, which is usefully done during the winter months, such as the cleaning of old combs and hive boxes of wax and propolis.

With the combs, I embark upon this by initially scraping the excess deposits off the woodwork, scraping out the grooves where the wax foundation is inserted and then washing everything in a hot caustic soda bath (don’t try this at home!). This removes every vestige of wax and propolis, leaving pristine wood-work with no likelihood of disease bacteria or spores remaining, should there have been any in the first place (and though there were no signs of disease in any of my colonies last season, such cleaning prevents the likelihood of any potential build-up). 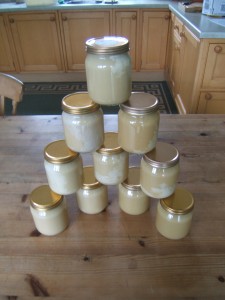 Good hygienic practice is the secret to successful beekeeping and makes for happier bees. When the bees eventually break away from their winter clusters and start to expand their brood-nest, I will place some of these cleaned boxes and frames on top of their existing boxes for them to expand into. These boxes, when finally laid up with brood and stores, can then be separated. With the bees and queen in one box carrying on as usual, the bees in the other (queen-less) box will start to produce queen cells to replace their “lost” queen. These, on hatching, will either provide me with a replacement queen for the old queen in the first box and a second, queen-right, colony, or the option to re-unite the two boxes, with the new queen replacing the old, thereby giving me a strong colony once again but now with a young, vigorous queen.

Lastly, I have been extracting the last of my ivy honey by cutting out the ivy-clogged combs from their frames, cutting them up and melting them in a large honey bucket. On cooling, the wax (having a lower density than honey) comes to the surface and solidifies in a disc, which can be removed. The remaining honey is then filtered and bottled, when after a few days it re-solidifies. Job done! So those who imagine beekeeping is a summer season job should think again! There’s always plenty to do!