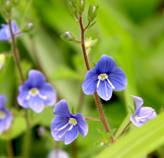 Though rain on a bank holiday may dampen some spirits and darken the skies, there is also something greatly uplifting in the renewed zest and vigour restored Roseland flora that even in a few dry days had begun to droop a little in places, for want of water.

Colour is everywhere more vibrant and saturated; flowers positively jostle for attention amongst the intensely green foliage; darkened grey skies provide a dramatic backdrop to the landscape, offsetting the newly lush and verdant scene to advantage. It never fails to impress me. 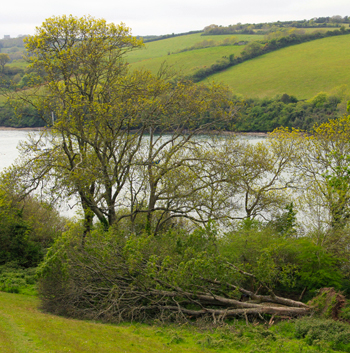 Less pleasant have been the unremitting, cold winds. Whilst the Roseland’s outstanding natural beauty is created out of its exposure to the weather, destructive gales at times leave behind scattered debris and even fallen trees. A mature and very tall sycamore near Tregassick came down mid-May. It happened to contain an owl box – with an occupant.

My RSPB colleagues and I visited the site with our associates from the National Trust, who manage the land where the box is sited. The tree by this time had been down a week, but we were pleased to find that the occupant, a tawny owlet (Strix aluco), had climbed out of it and was sitting safe and sound higher up on a branch. Tawny owlets leave their nest sites at 3-4 weeks old, climbing higher up into the tree canopy – this is termed ‘branching’ – where the parents continue to feed them. Occasionally the owlets may fall to ground, where they are vulnerable to predation until able to climb back into the trees above. For this reason, anyone finding an owlet on the ground should not assume it to be orphaned; the parents are almost certainly close by and still feeding it. People should not pick up grounded owlets as the parent birds may attack, going for the enemy’s head with their needle sharp claws. Wildlife photographer Eric Hosking was blinded in one eye when he was attacked by a Tawny owl. Owlets clearly in immediate danger can be placed in higher branches but with great caution, given the parental response. Doing nothing at all is the best course of action. 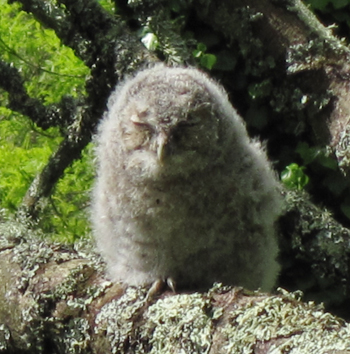 The owl box at Tregassick has been made sound and more weatherproof and placed in a new tree. Since then, the owlet has been seen perching in a completely different tree than where it was found, with a parent bird nearby, so it is clearly evolved for survival despite challenging events such as this one. The owlet has been nicknamed ‘Al’, for Alan Collins, who first reported finding it.

And finally: the very latest news is that there are in fact two owlets and they can both fly! 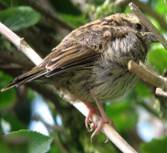 I was delighted to discover the first Cirl bunting fledgling at Gerrans, towards the end of May. It now appears to have a sibling and both have well developed plumage. Not only this, but the parents have been seen mating again recently, in preparation for a second brood. This is good news as it shows that, despite some cold and wet weather in recent weeks, cirls have been productive, along with other species that have fledged broods. This would indicate that there is suitable natural food available for chicks. It may also be the case that the most successful parents are ones with access to good adult food resources too, such as feed supplements put out by humans. As the season progresses we may have more and better information regarding that. 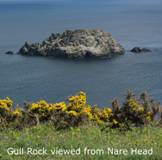 On the day that we visited the owl box, we were also taking part in a National Trust bird race survey, to list as many species as could be found on National Trust land in the Roseland. Such surveys are carried out more than once in the year as the seasons see different migrant species come and go. The Autumn/Winter survey tends to record a higher number of species than the Spring/Summer one. The survey undertaken this May recorded 59 species of birds, many of which are common and familiar to us all. Among the less commonly encountered species were listed Guillemot (Uria aalge) and Razorbill (Alca torda), seen on Gull Rock off Nare Head, as well as Fulmar (Fulmarus glacialis), Yellowhammer (Emberiza citrinella) and Wheatear (Oenanthe oenanthe), to name but a few. We did also manage to squeeze in a Cirl bunting, of course!

Some species are notably absent from the list. The Starling, for example, was not recorded because areas surveyed were not close enough to human settlements where this species tends to be found.

Things to look out for in the Roseland in June