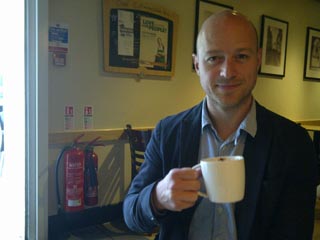 A former journalist and now film editor, working on anything from features to drama, Rob now works from his home studio, editing commercials and promo videos as well as writing. He lives in London and describes himself as “roaming the streets in search of inspiration, drinking too much coffee and not writing as much as I should.”

Over coffee, he talked about his debut novel ‘The King of Spain’ (reviewed this month) life, the universe and everything.

“The story started out as a loose idea for a film, set in an infirmary just after WW1. At the time, some elements of the central character were well formed, although others were not. So, for example, one of the patients believed he was the King of Spain.”

“Some of those ideas overlapped and intermarried. I wanted to make a start on my first novel and one of the triggers was the way the world is changing so rapidly, and many people don’t find their way in life. They need time to understand technology, where things are going, but they’re getting older, without necessarily having an improving quality of life.”

“I was bored with apocalyptic films and books and I began to wonder if there was an alternative ending, one where nothing really happens.”

And what does Rob think of his book now it’s published and has had such good reviews? 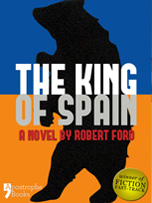 “It’s an odd book, but heartfelt. I hope the emotions in the book mean something to people. The surprise has been that, although I wanted to write a book, I never thought about the interactive part of being published. The selling, talking to people and so on.”

I suggested he might like to be interviewed on Hub Radio when it’s launched – an idea he was delighted with and plans to keep in touch, particularly as he was introduced to Cornwall by his wife whose family had holidayed there over many years. It’s an area he loves, finding it simultaneously “foreign, familiar, different and lovely”.

What has surprised you about being a published writer?

“I’m a first time writer. I haven’t attended any courses or studied writing; I just started building from the ground up. It was an organic process, leading to a blueprint for the book. I’d recommend anyone thinking of writing a book to produce a synopsis – it was a tip I was given and it really helped. Writing a synopsis helped nail down where I was going, but without restricting me.”

“Finding Apostrophe was very helpful too. I’m glad I didn’t self-publish. To me, being a writer means being in print, being able to see copies of your book.” 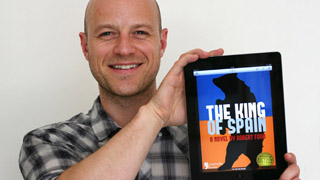 “I used to write only at night but I now manage to write daily for longer periods. I have lots of ideas for further books. The first draft of ‘The King of Spain’ took about ten weeks. I had a target daily word count and I was lucky enough to have a break from work at that time. It was a fantastic experience and ideally I’d like to write full time.”

And what else did we talk about? Languages, babies, fussy cats, his real name, favourite books, promotion ideas for a friend’s new burger restaurant (I offered an inspired slogan, free of charge and for use without tiresome copyright issues), the future possibilities of our Tehran based radio show, and, of course, our preferred coffee outlets.

Finally, I asked him what he’d like me to say about him. “I’d like you to say I’m a very nice chap who loves writing and people should buy my book.”