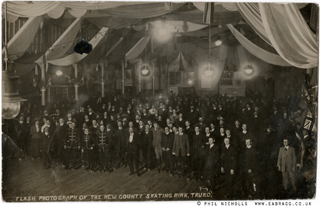 I couldn’t resist it, these lyrics were at the back of my mind after considering one of Bragg’s images, there was something I remember hearing as a kid and a quick search turned up…..

FLASH, BANG, WALLOP! From the London Musical “Half A Sixpence” (1963) (David Heneker) (see below for video!) 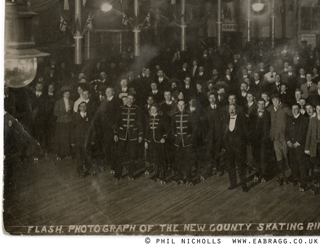 Hat blown off in a cloud of smoke
Clap ‘ands, stamp yer feet
Bangin’ on the big bass drum
What a picture, what a picture
Um-tiddly-um-pum-um-pum-pum
Stick it in your fam’ly album!

(Thanks very much, one more picture. Hold it!)

I recently picked up a real-photo postcard by Edward Bragg with the title, ‘Flash Photograph At The New County Skating Rink, Truro’. This bizarre, haunting image of a large gathering on roller-skates, (probably dating to C.1910), grabbed my attention, jumped the queue and set me on a quest to discover more about the technique used to record such a situation at this period.

EAB working in the early years of the C20th will have been using that classic flash-pan we see in movies, literally a terrific flash with a bang. A combination of magnesium powder and potassium chlorate seems to have been the first widely used mix, ignited perhaps by touch-paper or a spark created by clockwork mechanism. Flash photography was a hazardous business, we certainly take our kit for granted these days and I’m not surprised Edward titles his image ‘Flash Photograph’. He’s literally saying, ‘This is what I can do, I am using the latest technology whilst putting my life on the line here. Be aware!’ 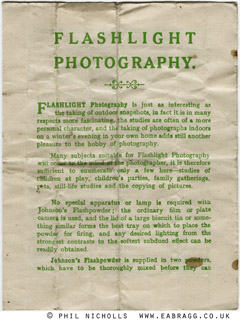 Apparently flash-powder accidents were a common occurrence and photographers were disfigured or killed in the process of just grinding the powder in the early days. That was just the preparation before actually causing an explosion with one hand whilst operating a camera with the other. It sounds utter madness but these were pioneering days of photography and you’d probably have a go if it kept you ahead of your contemporaries. For the first time it was possible to create instant photographs in very low light with a higher shutter speed.

Imagine being present for the shooting of this skating rink pic in Truro; the photographer up on the balcony calls for your attention before igniting the powder in his flash-pan; there’s a phenomenal burst of light, a ‘woof’ of sound and a cloud of smoke and probable fall-out of ash. At the other end of the camera, Edward literally gets it in the neck. It was probably like standing next to a hot frying pan, hot sparks and that cloud of smoke….or worse if the curtains go up in flames! I imagine you only got a couple of goes before abandoning the premises! 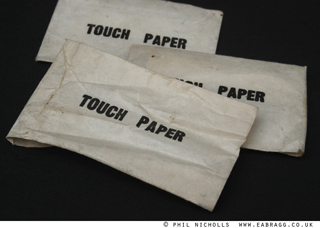 I’m imagining the scene of course but the facts are there. Initially gunpowder/magnesium mixes actually caused explosions. By 1910 a pre-mixed powder went into the pan making the business mildly less hazardous although explosions still occurred with some regularity…..I’ve just bought a clockwork flash-pan manufactured by Agfa, complete with flash-related paraphernalia and instruction leaflets, all contemporary with Edward’s skating rink image. There’s a table instructing the use of ‘Johnson’s Flashpowder’ and it appears that our group probably needed approximately 150 grains of the mix…….whatever that equates to. There are packets of touch paper present too along with a spare flint for the mechanism and I’ve photographed some of these surviving pieces of photographic history for Roseland Online.