Staying with Edward Bragg’s images of The Roseland this month, I’ve pulled out a few of my favourite pre-WW1 glimpses of Percuil. 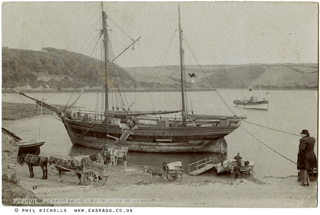 At the end of June I took my favourite walk under blazing sunshine, beneath a fabulous, cloudless, deep blue sky; Gerrans to Polingey. From the mill pool I love the walk around to Percuil, where as ever, I was amazed at the volume of leisure-craft moored on the water there. I always think about Edward Bragg when I’m at Percuil as it’s another of his much favoured locations between C.1906-1912. Things were subtly different when photographed at this period. 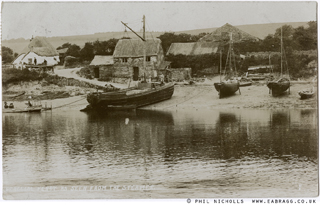 The buildings look dilapidated and there are very few boats to be seen in these images taken during the first decade of the Twentieth Century. The first couple of Edward’s views show working life on the river including a fantastic captured moment, a delivery of coal C.1906-07, apparently much awaited in the winter with good reason. The coal is being loaded onto carts via basket and shute with a host of donkeys employed in the process of moving it up the slipway. The ship, a Ketch I believe, is named ‘Pursuit’, the steamer ‘Roseland’ is visible offshore and the cottage at Trewince Quay can be seen in the distance. 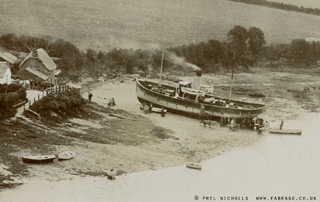 In another of his photo-cards Edward gives us a further glimpse of a working day at this location. Titled ‘Percuil Ferry As Seen From The River’, this example sees people being carried to and from the steamer to the left while in the centre a barge is being un-loaded. A sign on the large thatched building reads, ’West of England Bone & Manure Company’, followed by the name of an agent, and, ‘Apply To The Ferryman’.  The company are listed as having premises at The Quay in Penryn and are known to have used various agents in Cornwall. They processed animal bones and guano to make a fertiliser for turnip crops needed as feed due to an increase in animal husbandry. 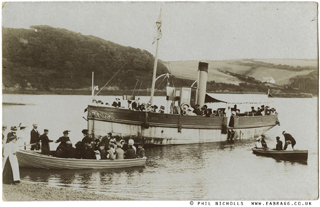 It wasn’t all work at Percuil; steamers regularly called here bringing visitors via St.Mawes, Place, and Falmouth. A visit to Portscatho and its surroundings was often undertaken via steamer and Edward Bragg produced real-photo postcards that were sold en-route and at destination capturing that tourist market. We can see in his pictures how a vessel would anchor offshore with passengers being rowed in to pick up on-going transport. In one of the images a mixed bunch of people including a chap wearing a top hat are being brought in to a wooden jetty, all classes travelled this way, there was no alternative unless you had your own yacht with crew! 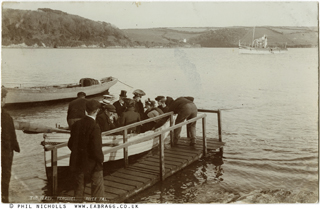 Percuil may now be full of moorings but it is still a tranquil spot; it’s but a moment away from beautiful secluded creeks and stony beaches. I’ve added a couple of those views of The Percuil River as pictured by Edward Bragg which show, away from the houses and boatsheds, the wooded hills running down to the water just as they do today. In the last image, taken from the St.Mawes side of the river, there is a view of the boatyard with Place House just visible. This is one of my favourite moments captured by Edward Bragg and I wonder, who is the man with two horses in his charge. I wonder what he would think of the volume of craft sitting in his river! 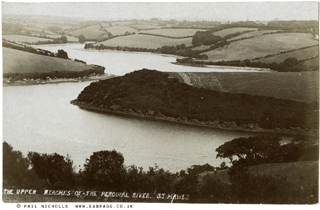 Next month we’ll see Edward’s photographs of Trewince alongside my own – I’ve attempted to re-shoot from the same spot one hundred years since the originals were created. How much has Trewince changed? We shall see!

Please visit the EA Bragg website (www.eabragg.co.uk) if you’d like to follow my progress as I search for and attempt to interpret the work of this photographer. 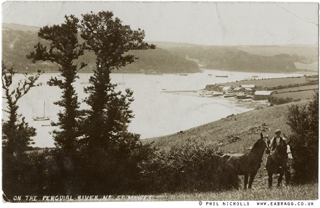