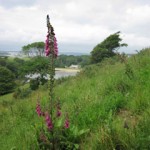 Enjoy a footpath walk along our many hedgerows and woodland edges that take you through beautiful countryside, and at this time of year you can hardly fail to notice just how many insects are about. The air is alive with them. Their part in the food web is highly complex, interwoven at several trophic levels, through diets based on plants and other animals. One of the jewels of this animal class is a family called the Pentatomoidea, or shield bugs, named for the shape of the adults when viewed from above.

Shield bugs are true bugs, not beetles, members of the order Hemiptera. There are currently 1709 classified Hemiptera in the UK, of which the shield bugs form part. Adult Shield bugs display colour and often highly patterned morphology, making them attractive and interesting animals to look for and study. Even nymph and subadult bugs can be very colourful, and often look quite different before reaching the adult stage. 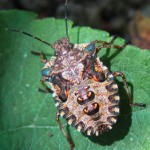 One of the most common and easily recognised of the shield bugs is the Common green shield bug (Palomena presina). The bright, grass-green body contrasts with the darker brown wing membranes poking out at the bottom. Individuals turn a brown colour later in the year. They occur ubiquitously, including in parks and gardens.

Another common species having particularly ornate adults is the Red legged shield bug (Pentatoma rufina), depicted here (right). This species overwinters as young nymphs, which feed mainly on Oak, Hazel, and Alder, as well as orchard fruiting species such as apple and cherry, where their cryptic markings disguise them well. The adult diet is omnivorous, including other small insects, larvae and fruit.

Hairy shield bugs (Dolycoris baccarum) like the ones seen below, exemplify the herbivorous species, showing a preferance for plants in the Rosaceae family, hawthorn, bramble and common dog rose, for example.

Most shield bugs feed on plant sap, for which they employ symbiotic bacteria to digest the material they ingest with their sucking mouthparts. The bacteria are passed from the mother bug to the young at egg laying; this sets them up for optimal nutrition when they hatch, by eating the bacteria-smeared egg cases, before dispersing.

The Parent shield bug (Elasmucha grisea) exemplifies a species exibiting maternal parental care after egg-laying. Although the adult male dies soon after mating in the spring, the female lives on to brood the eggs and hatched young. This strategy helps guard the nymphs against predation and parasitic attack.

You can find out more about these beautiful and fascinating insects and their relatives at British Bugs, where you can see many high quality images of the different species and life stages. It is well worth a visit. 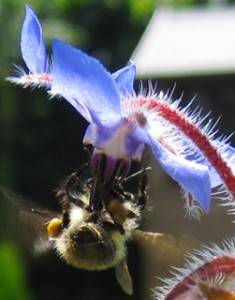 Whilst you’re enjoying the wonderful weather we have been experiencing this summer, spare a thought or two for what insect friendly plants there are around you that you could try easiy cultivating in your garden next year, by collecting seed. Pretty blue Borage is easy to grow in  any well drained soil, in sun or partial shade. Once established, it can be relied upon to self seed year after year. Bees are very fond of borage flowers, which are also a traditional addition to Pimm’s drinks. So raise a glass to the bees and drink in the taste of summer!

The Cirl project continues to add breeding pairs to its 2014 monitoring records. We are now up to 34 and still counting! Could we reach 40 by September?

There have been an increasing number of sightings in Gerrans Bay of pods of Common dolphins. In mid June a very large group of 30 or more was seen close to the pit at Portscatho; however, this occurrence coincided with Naval exercise further offshore, which may indicate frightened animals grouping together.

A note on Common buzzards

The Common buzzard is a beautiful bird, iconic where it sits proudly on telegraph poles and other high perches, or soaring above hillsides on thermals, crying out to other buzzards. It is not liked by corvids and gulls, who see it as a competitor for resources. Some humans don’t like them either.

I was assailed recently by a member of the shooting fraternity, who was keen to assert that the numbers of Buzzards present here in the Roseland was a serious threat to that business. They pressed their assertion by stating a curious belief that Cornish tourism is almost wholly dependent on the existence and presence of the shooting industry, and that it would otherwise fall apart and we would all suffer.

Aside the sickening realisation of being faced by a human keen to kill a British native species (Buzzards) in order to promote and then kill some more of an introduced species (pheasants) for mere sport, it also highlights the lack of understanding that many people may have about the feeding ecology of buzzards and their place in the food web. The diet of buzzards consists in the main of small mammals up to about 500g in weight, such as voles, mice, rabbit kits, moles and similar.

They may also, like corvids, opportunistically take carrion, small birds and invertebrates, even earthworms. The buzzard is fully protected under the Wildlife and Countryside Act 1981, which makes it an offence to kill, injure or take a buzzard, or to take, damage or destroy an active nest or its contents, without special licence from Natural England.