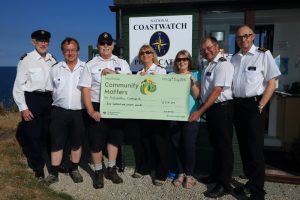 Waitrose Truro have handed over a cheque for £516 to National Coastwatch (NCI) Portscatho.

During June 2018, National Coastwatch Portscatho was one of the three charities chosen by Waitrose in Truro.  Shoppers expressed their appreciation for the work of the Lookout and its Watchkeepers by placing the familiar green tokens in the NCI box. 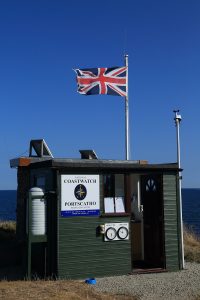 On 26 July Carole Chapman from Waitrose visited the Lookout to hand over the cheque and to see the work of the NCI watchkeepers at first hand.  She said “We are really pleased to make this donation to the NCI station – it is the largest single donation Waitrose in Truro have made, which demonstrates the wonderful support you have from our customers.”

Sue O’Donovan, Station Manager at Pednvadn Point, thanked Waitrose and their customers for such a large donation, adding that it would greatly help towards purchasing new equipment to enhance the capabilities of the Watchkeepers on duty.

The Lookout is staffed entirely by NCI volunteers and is open from March through to the end of October.  If you think you would like to become a member of their team, do contact Sue on 01872 530500.