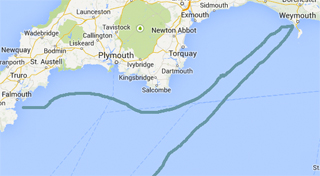 As I write this we are in the final build up to the first major regatta of the year, so before I go any further, and in an unfortunate circumstance the results from this regatta will have to be kept in suspense until next months article. However if you really cant wait, please visit our website, where you will be able to find more regular updates on how everything is going.

So what has changed since last month? Well in a word ‘A lot!’
I left off last time with Zennor and I on the brink of leaving the shire of Cornwall, and starting our exciting trip around Europe. Well you will be pleased to know that has indeed happened.

The first leg of trip was rather a short one and only took us a far as Weymouth, home of the 2012 Olympic games. Before leaving for sunnier climbs, Zennor and I thought it would be a good opportunity to compete in the first of the UK spring series regattas for some racing experience. In true sods law style, after battling some of the biggest storms we have seen in Cornwall over the entire winter, as soon as we leave the weather perked up! But with our bad luck already spent on the weather, we were feeling confident about the racing, and rightly so, Over the weekend we competed in 7 races across a range of conditions and walked away with 7 convincing wins.

While the spring series regatta wont be the most highly contested regatta we will ever do, it was good to get us back into the right racing mind set, and force a few racing situations on the start. We finished Weymouth very happy, our speed seemed good against the other brits and on the whole the racing went rather well.

Following Weymouth, it was time to start the very long journey down to Palma for a few weeks training in the build up to the first european OCR (Olympic Class Regatta) at the end of the month. We left Weymouth in the afternoon following a morning of working on the boat, from Weymouth we traveled to Dover for our evening ferry to Calais. 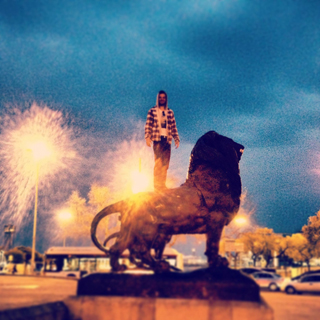 Having docked in Calais at about midnight, we thought it was a good opportunity to get some good miles under our belt while the roads were clear. And to be honest given how loaded the car was sleeping wasn’t really an option. After a full 24hrs traveling, across the width of France and little of Spain, with a small 2hr sleep in the middle, we arrived in Barcelona for our ferry across to Palma, Mallorca.

We had made such good time on the drive, that we actually had some time to kill in Barcelona, which was great, it is an amazing city. We spent most of our time taking in the sights, grabbing some food and climbing on lions.

Finally on the morning of the 12th, after an overnight ferry we made it to Palma. And the number 1 priority in our overly tired slightly confused state was to find a Cafe con Leche as soon as possible. Refuelled and on a slight coffee high, we spent most of the morning putting the boat back together, before leaving the boat park to find our accommodation back in the Palma city area.

We are staying with a friend of Zennor’s, a very nice fellow, Cornish local called Claire. She is involved with the super yacht scene out here and has a lovely apartment which she had agreed to share with us. To be honest we spent the rest of the day sat on the sofa, the weather clouded over and we were exhausted.

We along with about 35 other boats, had arrived in Palma early in order to get some training in and compete in a warm up regatta. following our arrival we only had a couple of days before the warm up regatta started. We were able to get some great hours on the water in, and it was clear that we weren’t a million miles off the pace already! 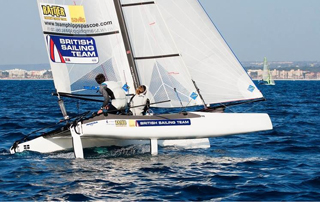 If I’m honest, Day 1 of the warm up regatta was a crash reminder course (not literally) in racing for me. It has been 1.5 years since I last helmed a big race in anger, so there were definitely some quick lessons relearned! But with champagne conditions, and some fierce competition, we came away from day 1 having scored a 14th and a 10th. But knowing that we had a lot left in the tank we returned to the beach happy.

The winds were a little lighter on day 2, but the sun was shining. We had great speed in the more marginal conditions, and having better starts in the first 2 races we were mixing it right at the front of the fleet, with the likes of Franc Cammas and Iker Martinez. In the first 2 races of the day we scored a very impressive 3rd and 2nd. Unfortunately the final race was a bit of a disaster, one of those races where if it could go wrong, it did! we eventually finished up in an unfortunate 18th. But very happy with our great pace and starting to get my head back into racing again.

Similar conditions to the previous day we knew we would had good pace. After being a little eager in the first race we ended up scoring OCS,10,5. But we were flying always moving forward up the fleet, and one point we sailed straight through Cammas’s lee and then up in front of him. We ended up in 7th overall, which on a world stage and in our first regatta together is a pretty flipping respectable result. For a team that is sure to improve, to be mixing it at the front already bodes pretty well!

So with our heads high and after the excitement of the training regatta, It suddenly became rather quiet in the boat park. With most teams choosing to take advantage of their last chance to get home before the main regatta, we and a select committed few stuck around. 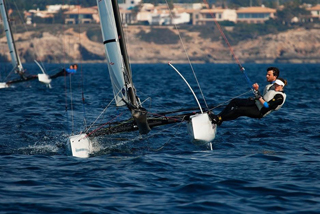 Over the proceeding week we took the opportunity to match up against some other teams, to work on speed and set up. This was something we were unfortunately unable to do while back in the Cornwall due to the lack of other Nacra 17s down that way. On our first day of training we were asked by a swedish team if we would match up against them. It was great to finally get some real speed work in, and the good news is we were fast, really fast. Despite the Swedish guys trying everything, they were struggling.

We spent the remainder of the week working with some friends of mine, an Australian team and a very experience Aruban team. Generally we have been going really well, across the conditions we have experienced Zennor and I are flying. We are really pleased with this, because up until we got here to Palma, all of our settings and speed work has been done completely based on feel, as we have had no other boats to reference against! Taking that into account and our good performance, it suggests we have a good feel for the boat, which is a great asset.

This bring us up to now, we are currently 5 days away from race day 1 of the Palma OCR. We plan to have the next few days on the water and then day or 2 off just before racing starts. As I mentioned in the previous article the results from this regatta are incredibly important to us, as it is our first real opportunity to prove to people what we are made of. Keep more up to date on our website, of check back next month to see how it all went.

Thanks for the continued support.