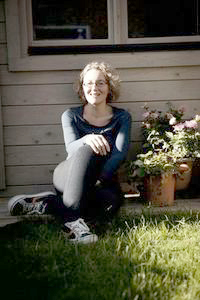 Elizabeth Haynes’ books are published in more than 30 countries and in over 20 languages, with more due for release. Her novel, ‘Into the Darkest Corner’, won Amazon’s Book of the Year in 2011 and Amazon’s Rising Star Award for debut novels. It was also featured on Channel 4′s TV Book Club; more importantly, it was reviewed last month for Roseland Online (I loved it). It’s a story with world wide appeal and, with luck, it will also be made into a film.

As if that wasn’t enough, in 2012, at Theakstons Old Peculier Crime Writing Festival, Elizabeth was one of four writers chosen by Val McDermid as the hottest new talents on the crime scene.

You’d be forgiven for thinking all that praise and publicity would go to her head but, as I discovered, when we met, Elizabeth is an incredibly generous person, with her time and her admiration. In fact she’s the first author who’s ever arrived bearing a copy of a book written by another author (The Sleeper by Emily Barr) for me to read. Knowing that I use the Night Sleeper between Truro and Paddington, she thought I would enjoy it (I did; see next month’s review).

Discovering a shared passion for Patisserie Valerie’s gateaux, we met there for what turned out to be, not so much an interview, more a chat about books, cake, animals, life, the universe and chemical toilets (all in the name of research). So, who is Elizabeth?

“I grew up in Sussex and studied English, German and Art History at Leicester University. I now live in Kent with my husband, son and Spanish rescue dog, Bea (aka the Shed-dog or the Writing-dog).”

“Until relatively recently I was a police intelligence analyst, working on violence and abuse offences, and I draw heavily on that experience to ensure that the crimes and procedures in my books are as accurately portrayed as possible, something which is important to me, as both a writer and a reader. After taking a career break from my job, I made the move into full time writing.”

Another hangover from her days with the police, when she worked largely in open plan offices, is the fact that, although she now has a Writing-shed, she prefers writing in coffee shops, stimulated by the hustle and bustle around her.

It’s worth noting that her attention to detail doesn’t just focus on police work, for example, when writing ‘Revenge of the Tide’ the story of Genevieve – office worker by day and pole dancer by night, Elizabeth attended a pole fitness class at the local leisure centre.

She says “I’ve been writing stories as long as I’ve been able to write. I remember my stories being passed around the playground at school; they were stories like the ones which appeared in ‘Jackie’ and ‘My Guy’. Then, when I was about 13, I bought a second-hand electric typewriter to produce my masterpieces on; But on leaving school, writing wasn’t really something considered as a possible career, so I put it on the back burner.” 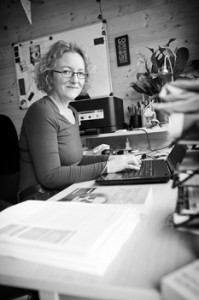 Now an established and highly acclaimed writer, I asked her what tips she had for new writers and those yet to start. She says “I’m a regular participant in, and a Municipal Liaison for, National Novel Writing Month (www.nanowrimo.org), an annual challenge to write 50,000 words in the month of November. It’s a really good place to start; it instils discipline and provides encouragement to get started.”

“Back in 2005, a friend introduced me to it and it turned out to be the website I’d been waiting for all my life. It’s an annual challenge to write 50,000 words in the month of November. There isn’t a huge prize so there’s no reason to do it other than for the sense of achievement. Your novel doesn’t even have to be good, it just has to be written; it’s all about word count. You can think about editing afterwards. The whole point is just to write and to gain confidence. If I can do it, so can anyone. And some amazing books have come out of the November project, for example the hugely successful ‘Water for Elephants’ by Sara Gruen.”

“On my first attempt, I wrote a serial killer-thriller in which the characters consisted entirely of people I knew. I also had two characters called Simon, which was a huge mistake. I thought I’d been clever, since in real life we all have friends with the same name, but it doesn’t happen in novels, for a reason. It’s horrendously confusing. The important thing was that I did it – I wrote 50,000 words in a month, the story had a beginning, middle and an end.”

“By the following year, I had a decent plot and good characters. By the end of November I’d written more than 50,000 words and I was less than half way through the actual story, so in 2007 I carried on where I’d left off. At the end of the month I had 130,000 words and still hadn’t finished it.”

“What I’ve learned is to back up my writing – constantly – and not to get too hung up on editing as I go; that doesn’t work for me. I don’t do a huge amount of research in advance, but I do any research necessary as the story takes shape. The first draft takes about six weeks, with a book taking around a year from start to finish, including editing. The whole thing can change dramatically at the editing stage, but it’s important not to lose the flow of the original. My husband is my final proof reader, but not until I’ve completed the book. His input at that stage means there’s a fresh pair of eyes and that’s tremendously helpful. ”

“In 2008 I wrote the first draft of ‘Into the Darkest Corner’. I enjoyed writing it, but I left it alone for a few months and then started tinkering with it again, adding scenes and moving other bits about. Two of my friends read it and liked it. I started wondering if it might be worth trying to edit it, to see if it was something worth sending to a publisher. I got help from creative writing tutor, Greg Mosse, who put me in touch with Myriad Editions, and after that things got very exciting.”

So, what next? Apart from our joint quest to find the best croissant in the UK, Elizabeth remains a “cheerleader” for NaNoWriMo and she’s working on ideas for a police procedural series. We’ll see a return of Sam Holland, a character from one of her previous books.

Summing up what she wants to achieve, she says “I want to produce crime fiction with a really authentic background, with accurate witness statements, analysis and intelligence reports, something where, in theory, it should be possible for readers to solve the crime, given the same information as would be available in real life.”

Me? I’m hoping for an invitation to the film premiere of ‘Into The Darkest Corner’!