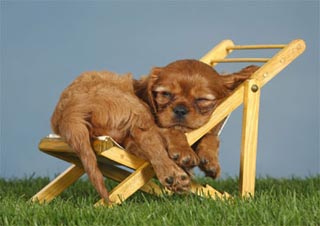 August is a tricky month to write an article and, to be sure that I don’t bore you to death, I usually check over what has been written this month over the last few years in an endeavour to bring something fresh. In a usual August you probably do not want to be too physical in the garden. I expect you have friends, children and grand children littering the house for the holidays and I suspect the garden is the last thing on your mind other than for sitting in or admiring. Don’t feel guilty about that. This is usually the month for enjoying your garden, appreciating the fruits of your labours and perhaps noticing the gaps and thinking about a bit of autumn planting.

But is this going to be a usual August?! Ok we have had some wetter summers recently but the last few months really have been dire. I try to avoid too much chat about the weather, it’s too easy. Equally I don’t worry about it as there is absolutely nothing I can do about it. But this year might be an exception. I have a bedraggled herbaceous border and runner beans that have struggled up the poles. However being the eternal optimist I have been looking at the benefits of all this rain. Just look at the health of the evergreen shrubs and trees. None of them have looked as good for several years. 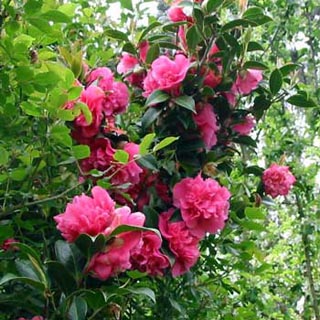 I often remind you that it is this time of years that camellias and rhododendrons and many spring shrubs are making their buds for next year and that they need summer water – well they got it and don’t they look good for it! And frankly my onions might be show stoppers. Many of the root veg which are basically water containers will have swelled beautifully whilst beans and sweet corn might appreciate little more sunshine and the warmth to go with it.

But the usual August jobs are there to be done. The veg that you have to be harvested regularly, the weeds pulled (I have never seen so many!) and the greenhouse is ever demanding of your time and water particularly if there are tomatoes and cucumbers. If you have a kitchen garden then all the peelings, cabbage leaves, stalks, pea pods and carrot tops should go into the compost bin. This is good soft material that will suck up the moisture from the grass clippings and decompose quickly with the heat to produce fresh compost for the garden. But if (‘if ‘she says!) you have blight then the potato tops and tomato plants should not be composted but burned. 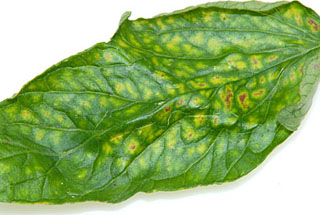 Blight is a fungus which will live on in your compost and soil. Otherwise though don’t waste a thing! I have horrors every other Monday when I see the expensive garden waste bags sitting at the bottom of the driveways waiting for collection. What a desperate waste of a free resource. Not only are you paying for the bag or bin to take it away but then you buy it back as compost in branded bags! There is no logic to this unless you live in a flat. Make space for a compost heap.

Now if you have gaps in the garden this is probably because you concentrate too hard in spring and then August comes round and you wonder where the flowers are. There are a few woody or shrubby perennials that flower in August, many of the cestrum, hydrangeas (love em or hate em!), hoheria. But other than those obvious ones, the only way to have colour now, and the best colour of the year in my opinion, is with herbaceous perennials. These are the plants that last from year to year, grow up in spring, flower in summer and then have to be cut down, (composted!!) and return again the following year.

I love them all because I can tidy the garden for winter, can split them for more plants in autumn and I have the pleasure of the sheer variety of the garden, plants coming up and flowering but disappearing in winter and surprising me again next season. They are predominantly hardy, strong and the most colourful plants we have. A border filled with these will plug gaps and keep the weeds down as most of them are so strong the weeds don’t get a look in. So do you want to look at an evergreen camellia with only its leaves or a vibrant Victorian verbena in white, purple or pink, 4ft high and flowering for 6 weeks or more?

A clump of Gaillardia, multi coloured monarda, echinacea, agyranthemum, perennial gerbera, phlox, hemerocallis from yellow to red and yes the dahlias, the chrysanths and rudbeckia, to mention but a very few in hundreds of different types. These are the kings and queens of the summer border giving us vibrant colour, which in Miss Jekyll like fashion you can colour group together if you want to. Summer is so short; the explosion of colour from the hardy herbaceous perennials is a sheer delight for three months of the year. 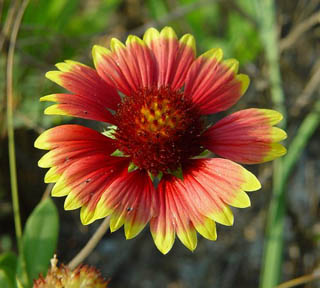 If your garden doesn’t have these herbaceous luvvies then you are missing out on so much pleasure. These are the plants that should be gracing your borders, filling the gaps and filling your vases for the house. If you don’t know them already look out for Eucomis, the pineapple lily, probably my favourite plant for a patio pot, and perennial!

Now I mentioned hydrangeas, which look at their best in July and August. They love our soils and one is tempted not to love them because they are so prolific. I heard them unkindly called a Cornish weed, and yet all the garden shows retain a space for the biggest or best hydrangea head. And rightly so, they are superb plants and so versatile. They are long lived, require pruning just once a year in the spring to two buds and then reward us with flowers for at least two months and dried heads in the autumn. They are easy to grow either in the garden or in pots. They will tolerate all soils and nearly all are very hardy. They like full sun but are grateful for a little shade and the climbing petiolaris loves a north wall to clamber up. More shade is recommended for the white and clear blue varieties. Any garden can have them because there are smaller varieties that will not over take. 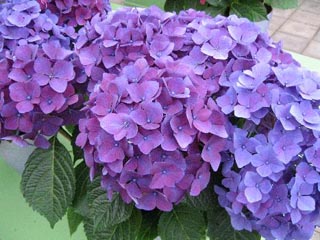 Hydrangeas hail from eastern Asia and South America, they have adapted therefore to a variety of soil types. They love a good garden loam, not too heavy and not too light. They love the seaside and a sandy soil where they will nearly always be pink or red. Leaf mould added to a light sandy soil will help.

A pH or acidity level of 6.5 is ideal for hydrangeas that are pink or red but for blue flowers the acidity must be around 5. That is why you so often see purple hydrangeas, the pH not quite correct, but unless you are a purest, who cares? And if you are in any doubt about the acidity stuff, grow white ones which are unaffected by soil type.

The flowers are roughly divided between mop heads the big round blousy girls and the more dainty flat headed lacecaps, but the quercifolia or oak leafed hydrangea and the aborescens have long conical heads predominantly white. 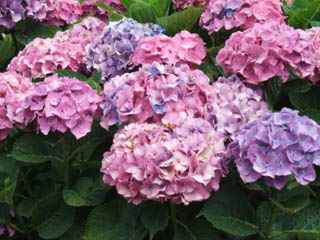 Hydrangeas are tough plants and although the books list every disease and susceptibility under the sun from red spider mite to vine weevil, they rarely seem to suffer badly from anything. Be careful about trying to grow hydrangeas from seed. So many of the varieties have sterile and fertile flower heads and if you get the wrong one you will be disappointed. Cuttings taken in spring from prunings or in summer, now, from none flowering shoots will take easily. I am living proof of the versatility and fun of hydrangeas. I planted a specimen hedge of them two years ago, the best blue varieties available. I now have the prettiest hedge of pink and purple and red hydrangeas. What fun when the rest of the border is blue!

Enjoy August if the weather allows, the hard work starts again next month!