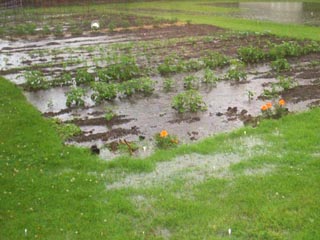 A hotch potch of things to talk about this month as however much we plan ahead June and July always seem to be the months when you have to act now and often cannot find the time for thinking ahead.

The biggest challenge for us has been early June gale force wind, lack of rain, then too much rain and whilst I know we want the sunshine for our visitors the lack of rain was becoming disastrous for farmers, growers and gardeners. The water that came has reduced the stress levels and in many cases just saved complete crops in many parts of the country, in others too much rain has been devastating – we are very fortunate. In the face of the disasters and the consequent effect on animal feed and our food prices, to worry about our gardens almost seems selfish.

However that’s our little bit of land and with all the work that goes in it is soul destroying to see no fruition either through the wind damage or fluctuating and unseasonably low temperatures. In early spring you could see the stress in trees. Our silver birch began to go crinkly, a very mature hydrangea petiolaris had brown leaves and even the pines look yellow in patches. It all rather showed that the effort that we put into our own compost which has gone into the veg beds was well worth while. With only a little additional water on planting, the onions, broad beans, broccoli, cabbage and now the runner beans all look reasonably healthy though some look as if they have been badly scorched by the wind. The new potatoes were saved by the rain and only the carrots and beetroot look less happy but will recover.

Of course any fruit, flowers or veg that are water or wind stressed are more attractive to pest and disease and because March was so warm and April so relatively cold there was a lot of early sappy growth that the aphids love and then the plant growth was checked. I was picking broad beans today and although I was fastidious in pinching out the tips earlier in the month there was still evidence of black fly. There is nothing worse than trying to pick beans in a mush of this pesky little fly. Equally I always grow a more dwarf bean because of the winds up here and I grow them fairly close together so they support each other. This year I grew a taller variety, Bunyards Exhibition. I have paid for this mistake, and despite staking the wind badly damaged the plants. 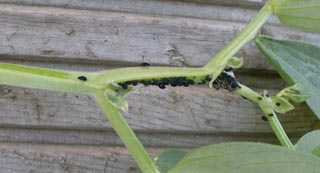 When that first batch of rain was forecast for one Sunday in early June, I stopped all work that we were doing in the Nursery and we set about weeding every bed we had to eradicate any plant that was not wanted. The purpose here was to create gaps, to let in the rain and we were amazed at how much weed we found in a fairly tidy garden and also at just how dry the soil was, in many beds it was just dust for at least and inch down despite our mulching in the winter and spring. But the task was successful and what rain we have had has now hit the soil. I had a local conversation this week when it was suggested to me that watering the garden is a waste of time and water because it brings the roots to the surface trying to find the water we think we are spreading liberally. To be honest that is correct, but in the case of new plantings is better than nothing. I had planted a Malus ‘profusion’ and at a price of £30, I wasn’t about to let it die!!

Now, at the risk of boring you to death I am going to repeat myself on the subject of greenhouse crops. You may think that I can’t think of anything else to write, on this occasion you would be incorrect. It is just that I am asked about tomatoes and cucumbers every year as different matters in their regard occur. 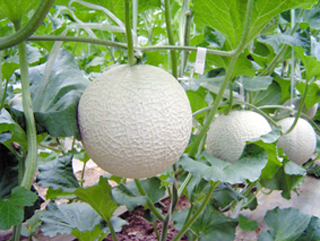 Tomatoes and cucumbers and indeed melons need to have side shoots removed regularly. Think about it logically. The water and food you give them comes from the root system. Every side shoot you leave on diverts the goodness which you want to go to the tip to grow and to the fruit to swell. Take out the newly growing leaves between a main offshoot leaf and the stem. The side shoots sit in this comfortable nook next to the stem and on the out growing leaf. They are easily identified at this time of year as they are much more light green in colour and look like new growth. I am advised, and again logic prevails, that side shooting is best done first thing in the morning before the sap starts to rise rapidly. That is certainly true of melons where I side shoot early in the day but don’t do them all at once. Melons can bleed to death quite easily.

That done take off the lower leaves below the lowest truss of tomatoes that are forming. As time goes on you will therefore be removing leaves consistently up the stem. (This all applies to cucumbers and melons too). The plant does not need these leaves that often become quite manky anyway and you are letting in light to ripen the fruit and divesting the plant of leaves that it doesn’t need to support and expend energy on. Use a proprietary tomato food, these plants have grown from seed, they want to be tall, they want to flower and produce fruit and all that in one short season so give them the food they need to do it. This is why I so dislike grow bags, there just isn’t enough oomph in them to support a strong plant for several months. 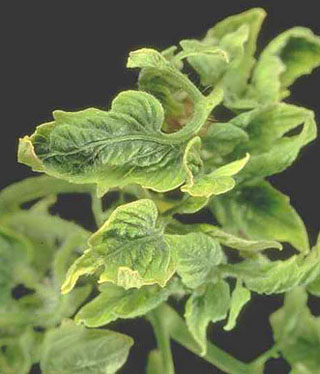 Also remember that cucumbers like a humid atmosphere but with ventilation and tomatoes prefer drier air. If you grow them in the same greenhouse then water the cues leaves as well but not the tomato leaves. Even better, water the cucumbers roots and leaves with seaweed solution, that helps with mildew issues. The most frequently asked question is why do the leaves on my tomatoes curl up? Usually this is because the plant is too hot or too cold. It is trying to protect the leaf so that it can photosynthesise and transpire properly. Check your heat and ventilation. Again, that said, our temperature fluctuations from April to June and between night and day have made easy regulation very tricky. The next problem seems to be blossom end rot where the base of the tomato is brown often with a green circle. This is caused by irregular watering. Try to water in the same amount at the same time every day and this problem will disappear from future fruit but not from that existing.

Keep dead heading your summer bedding plants for continuous flowering and find time to put your feet up between what I hope will be gentle showers, still days with some much needed sunshine for our plants and our visitors.