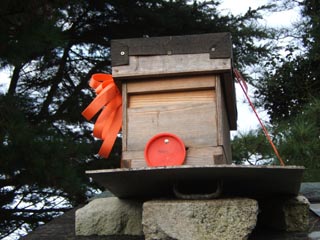 Well, what else does Nature have in store for us? Having had a spring/summer season mainly devoid of foraging opportunities, the bees now have had to endure a month of weather ranging from bitterly cold to persistent downpours and winds of a strength not experienced for many a year down here in Cornwall. Whilst this all kept the bees indoors, the cold weather was a blessing because the bees could cluster together to maintain their cluster temperature and would have devoured very little in the way of stores. The wind was another matter, though.

Even with reduced entrances, the wind was so severe that it must have contributed to the chilling of the colonies to some extent, forcing them to move upwards in their hive to escape its direct impact. In one case, this resulted in the bees leaving the queen below the queen-excluder (which I still have on most of my hives so that the bees could store ivy nectar/honey in the box above). However, this resulted in the queen succumbing to the cold, since she had no bees to keep her warm, and despite my rescuing her, feeding her and warming her up before replacing her in the hive, she was no longer fit enough to survive. This means the colony is doomed, as it is now queen-less. I might find the opportunity to unite another colony to this queen-less one if the weather gives me a break but it’s getting extremely late for such actions.

Worse yet, another hive was blown over in the gusty wind on Saturday and, even though I must have found it on its side shortly after it went over, the likelihood is that the queen has been crushed, as when I checked the bees’ behaviour two days later, they were not flying like the bees from the other hives, they were wandering around the entrance as if looking for their queen. So now I have two queen-less colonies – and winter hasn’t even officially started yet!! I guess I should count myself lucky, though, as it could have been three! I have one smaller, nucleus hive still on the roof of my bee-shed, and it was not until about 9 o’clock on Saturday night that I remembered it! Out I went into the hurricane with my torch and a ladder (the things we do for bees!) and, sure enough, the westerly wind against the side of the nucleus hive had shifted it at an angle – any more of a shift and it would have fallen from the roof, resulting in the loss of the colony. 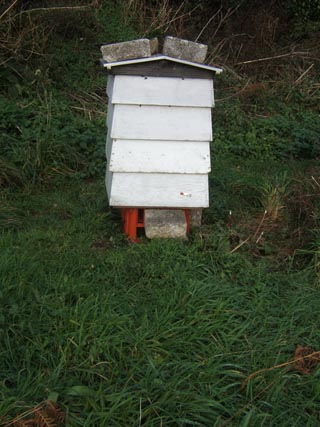 So, balancing the torch in one hand and a hive strap in the other, I climbed the ladder, strapped up the hive (after sealing the entrance!), and brought the hive down from the roof to be placed in my bee-shed. Earlier today, with the winds having abated, I replaced it in its original position on the roof, this time strapping it to its base to make it more secure – but it’ll have to come down again if the winds return. A lone bee stuck her head outside to see what was going on when I re-opened the entrance, but quickly went back in when she realised how cold it was!

So what else has been happening? Not a lot, to be honest, as it’s that time of year when everything that needs to be done for the bees should already have been done. I am still working on building the Warré hive when I have a spare 5 minutes or so but garden activity (like chain-sawing branches and trees that have been felled by the wind) is severely restricted (I think I am what is called a fair weather gardener!). My next task, though, must be to remove the supers and queen-excluders that are still on some of my hives. This should be a straight-forward business, as the bees will be clustering in the brood-box below the queen-excluder and I will have removed it and any boxes above before the bees even realise there is anything going on (I hope!).

It only remains then to place some fondant on the frame top bars in the brood-box (or over the feed-hole if the colony is strong). As part of my Integrated Pest Management approach to controlling Varroa, I will also place two grease patties on the frame top-bars. These patties are a mixture of cooking fat, sugar syrup and oil of wintergreen, the latter component being the Varroa treatment, and in trying to remove this foreign body from the hive, the bees will pick up the fat on their feet and transfer it around the hive – together with the oil of wintergreen. The two substances each contribute to the control of Varroa, whilst the sugar syrup, of course, is food for the bees, thereby supplementing their winter stores. Hopefully, that should mark the end of the season – though one never knows in this age of climate change what Nature will throw at us next!