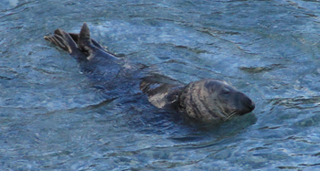 After days of wind and rain, November ended on a gentler, yet cooler note with some calm intervals. This was very different to its start, when spring-flowering plants were already well developed and some – such as primulas – were already in bloom. Near Towan, the first of our winter-beaching grey seals (Halichoerus grypus) was to be seen, lazily bobbing in the shallows near the regular winter haul-out.

The winter migrants kept – and keep – appearing. I was delighted to catch sight of a Firecrest (Regulus ignicapillus) on the 15th, flitting about in my garden. These tiny birds are smaller even than our native wrens (Troglodytes troglodytes) and are very closely related to their cousins the Goldcrests (Regulus regulus). My visitor was too fleeting to photograph, so please do Google images of Firecrests and Goldcrests to see what the subtle differences are. As is described here by the RSPB, “…the firecrest is brighter and ‘cleaner’ looking, with a green back, white belly, bronze ‘collar’ and a black and white eye-stripe. They have a yellow and black stripe on their heads, which has a bright orange centre in males”. Like Wrens, Goldcrests and Firecrests hunt for insects and other, very small invertebrate food. They do breed in the UK but mainly in the southeast, while others cross the North Sea to overwinter here. You are most likely to see them in wooded areas but they can be seen in bushy gardens. They are RSPB Amber listed, which means that their conservation status is of concern. See here for an elaboration of RSPB conservation status. 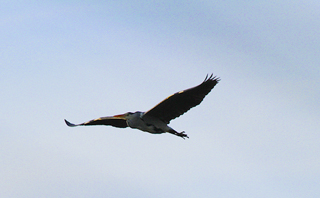 November really has been a month for the birders (although this may reflect a bias on my part). Out in Gerrans Bay, among all the usual suspects, have been seen Long-tailed duck (Clangula hyemalis), generally considered northern and eastern UK visitors; Common scoter (Melanitta nigra), another sea duck and in fact so uncommon that it is Red-listed; Black-throated diver (Gavia arctica) and Slavonian grebe (Podiceps auritus) have also been making their seasonal appearance here. One Slavonian Grebe was within 30 metres of the sea wall at Portscatho on 27th. I do not yet have any decent shots of these species, so here’s one instead of a Grey heron as it flew over, eyeing up my pond. Grey herons do eat fish but you may not also know that they will hunt for small mammals, amphibians and the young of other bird species. 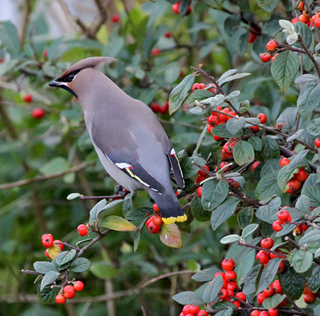 One of the most exciting new visiting species to the Roseland has been Waxwings (Bombycilla garrulus). We know of at least 3 individuals in the area since the 27th of the month but there may well be more. Although this species is not threatened, its appearance anywhere in south west England is considered unusual, since it usually migrates to northern and eastern areas from Scandinavia. To see them this far south and west in Cornwall is unusual, to say the least. This may be because the population in the breeding area outstripped its carrying capacity and larger numbers than usual were driven further south in search of more food resources. Large numbers of Waxwings have already been seen in Scotland and northeast England, accompanying the wave of thrush species making its way here. Of the three birds seen in the Roseland so far, one was seen on its own at Lanhay, whilst a male and a female pair were seen at Churchtown Road, Gerrans. The Gerrans pair has been especially attracted to berry-laden shrubs of cotoneaster, lonicera and pyracantha bushes in front gardens. Anyone wishing to see them may find that they remain for as long as the food resources are available. I recommend viewing these birds as they are truly stunning.

Something special to do this month 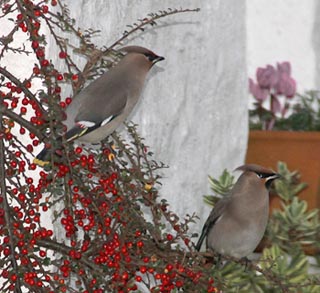 Here’s a really exciting new development of interest to people passionate about plants, both the horticulturalists and lovers of our wild flora. Wild plant charity Plantlife want to reach out to wild plant enthusiasts and nature lovers, by inviting you all to become wild plant pioneers. They want you to take part in the Wild About Plants Project, subscribing to their free, quarterly e-learning bulletin to learn more about our native wild plants. The November e-bulletin is out now. The Wild About Plants project aims to help people reconnect with the outdoors and their local green spaces. Working with schools, families and communities from all walks of life and with fantastic free downloadable resources, the team want to engage people with the nature on their doorstep. In recent years subscribers have been asked to record plant life in their local area and recount what they used to see/pick and forage for. Wild About Plants is funded by Natural England through Access to Nature, as part of the Big Lottery Fund’s Changing Spaces

Programme. It is a partnership project involving partner organizations throughout the country.

If you have any queries about Plantlife or the Wild About Plants project then contact Katie Cameron, Conservation Assistant at Plantlife
T:(01722) 342759
E: katie.cameron@plantlife.org.uk
www.plantlife.org.uk
They’re also on Facebook: Plantlife – speaking up for wild plants.