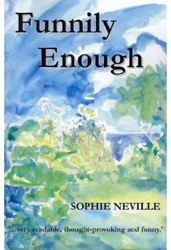 Available for download to kindle or in paperback, published 2013

A very different book, which tells of the author’s battle with ME, now better known as Chronic Fatigue Syndrome or Post Viral Fatigue [Syndrome].

In the midst of her exciting and varied life, which included being a child star, an adult career in TV production, travelling around Africa and anything else she could cram into her days, Sophie became ill. At first the cause was a mystery, possibly the result of exhaustion, which she and those around her expected to be fairly minor and short lived, but as time passed and she didn’t improve, a diagnosis was formed and her doctor suggested it might help her recovery if she kept a diary. Writing it, together with various therapies, painting (the book has some delightful little illustrations), the support of her family and friends all helped with her eventual recovery and, together with an increasingly strong faith, led to a refocussing of her life and ambitions.

She writes with humour about the “unrelenting fatigue”, referring to “regaining limited use of my mind” and the fact that her level of concentration had deteriorated to a span of 15 minutes.

As she says, “depression with a suitcase keeps coming and threatening to stay…it came yesterday and nothing, by means of logic or reason, could do away with my gloom”. Wonderfully descriptive and thus it might be of relevance to those currently suffering from this condition or any form of depression; it might also be a helpful support to those close to someone with similar symptoms. Often a difficult read, at other times it has some of the light-hearted tone and flavour of Gerald Durrell’s[i] “My Family and Other Animals”, but with fewer exotic animals, but even more eccentric characters.

Elsewhere on Roseland online, Sophie is the subject of two features, Acting Up and Writers Talking, so apologies to those of you with no interest in children’s books, illness, travel, film-making, animals or any of the other dozens of things that form part of Sophie’s wide ranging interests and life. Normal service will be resumed next month.