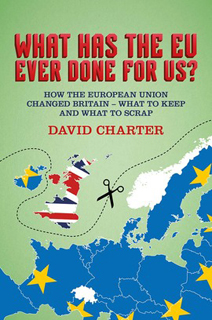 What has the EU ever done for us? By David Charter – Published by Biteback Publishing, 2017

Written by the Times’ Berlin correspondent, this book sets out how the EU has affected the UK and what might happen next.

So, what did they ever do for us? Aqueducts, freshwater systems, roads, sanitation, wine…. Oh, hold on, that was the Romans.

This book is fascinating (although possibly only to those of us with a serious interest in politics, finance, the environment and/or the EU).

The author tries hard not to be partisan and presents interesting quotes and data to produce a balanced view of the history of the EU, the EC and the Single Market. He examines the impact on the UK and reaches a conclusion, but I won’t spoil the plot by saying what that is.

Overall, what did it teach me? Well, I now know which country is guilty of what the European Commission called ‘perhaps the longest-running infringement of EU law in history’. I also learned that the great crested  newt may be more vulnerable post Brexit, than in 2015,  EU subsidies of over £500,000 each were paid to over 40 farms in the UK, with the average per farm around £23,000.

But what was most interesting (to me) was the number of UK Government Ministers over the years who have made significant decisions impacting on all of us, but who have vanished without trace. Coincidence? Maybe. Maybe not..

This book was a birthday gift from friends; I guess it’s not everyone’s idea of a fun present but I loved it. Truly engrossing.