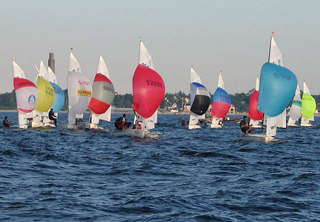 Why do boats float? We see dozens of yachts, dinghies, canoes etc while on watch in the Lookout and never question why they don’t sink. Likewise we accept that the huge ship making its way down to Lizard will quite happily go on its way with no problems. So it is not just small things which float – big things can as well. Yet chuck a rock into the water and it sinks – like a stone!

In a nutshell if an object weighs less than the amount of water it displaces it will float. If it weighs more then it will sink. The important word here is ‘displaces’. Get a thin piece of steel and put it in water and it will sink. But fashion that same piece of steel in to a boat shape so water cannot get over its side and it will probably float. The weight is the same but because it now has greater volume it pushes aside, or displaces, more water. Water is very dense and heavy so the more you displace the greater the weight you have pushed aside. When that weight exceeds the weight of the steel the object will float. 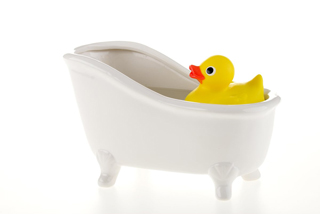 Dear old Archimedes first worked it out. The legend is that he was told by his king that he must decide whether the new crown the king had had made was pure gold or mixed with cheaper metal. Pondering on this he decided to have a bath and, while playing with his rubber ducks, noticed that when he got in the level of water rose. His body had displaced water. From this he worked out that he could get the weight of the crown by immersing it and measuring the displaced water. Don’t ask me why he could not simply weigh it against a known quantity of pure gold because I do not know. It’s only a legend after all – though Archimedes Principal is a law of physics.

Water is heavy and cannot be compressed. The weight of your boat has pushed some water out of the way but the water will try to push back. The contest between the two will continue until they are equal forces. At that point the hull will settle and float. Add some cargo and you make the boat heavier so it will sink some more until the forces are equal and once more flotation is achieved.

So that is why a boat floats. The amount of water it displaces equals than the weight of the boat. A ship’s weight can be expressed in four different ways. Its displacement is the amount of water ship and its cargo displaces. Its gross tonnage is the volume of the entire ship internally. Its net tonnage is the volume of the ships cargo spaces and is what is used to calculate port dues. Its deadweight is the actual weight of cargo in tons that the ship can carry safely. Confusing isn’t it? 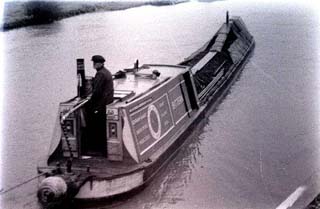 Wood was undoubtedly the first material generally used for boat building, though the Egyptians and Andeans made reed and papyrus boats. The first iron boat was built by John Wilkinson in 1787 for use on the upper River Severn. The project was regarded as impossible by the industrialists of the day but the boat, called Trial, was a success to be followed by three others. Iron eventually became the favoured material for barges on the English canals and some are still in existence, well over 100 years old. Iron then fell out of favour with the invention of steel which is easier to work.

Steel is not the only material used to build boats. The end of the last war saw the birth of the leisure yachting industry but there was a worldwide shortage of timber. In the early days many people bought old ships’ lifeboats and converted them. Well done they were inherently safe and could sail reasonably well. I know – I had one.

However the war had seen a lot of experimenting with plastics so it was natural that the new yacht builders should look in that direction. The advent of fibreglass (GRP) meant that better shapes could be achieved, proper sailing boat shapes, and the ease with which it could be moulded brought about continual improvement in performance. To begin with they thought that the thickness must be the same as with the wood on a wooden boat and the early designs were over engineered, robust, heavy and exceedingly slow. Nowadays it is possible to look through an unpainted fibreglass hull and see the water level outside!

There were other experiments and a very popular one among amateur boat builders was concrete. In the latter years of the war many floating marine structures were made of reinforced concrete, not the least the Mulberry Harbour which, after D-Day was towed across to the French coast to form a makeshift harbour to allow full-sized ships to dock and unload. Many of these concrete caissons exist today and are still performing duty as jetties and pontoons. The attraction to the amateur boat builder was simplicity and cheapness.

All you needed was miles of chicken wire, some steel rod, several concrete mixers and the concrete ingredients. You fashioned the rods and covered them with chicken wire until you had a complete boat shaped structure, usually upside down. On the appointed day you got together the concrete mixers, a gang of your mates, at least two expert plasterers, a pile pasties and two barrels of beer. You started at dawn and, everyone working like mad, you got the whole wire shape plastered inside and out, all in one go, with no joins. The construction site had to be undercover in case it rained in the evening and all you had in the morning was a sad wire cage above a mass of congealed concrete. Then you all you had to do was to turn it the right way up!

Amazingly it worked and there were, and probably still are, a lot of concrete boats about. If well done it took an expert to tell them apart from the fibreglass ones. The well-known marine cartoonist Mike Peyton build three – Touchstone, Moonstone and Loadstone. He wanted to build a fourth but his long suffering wife forbade it saying, ‘If he does another one it will be called Tombstone!”

Many long distance yachts were built of steel, a great and forgiving material. Its big disadvantage was, of course, rust. Long distance yachts get a lot of knocking about and, once the paint surface was chipped, rust would set in. Life with a steel yacht was one long battle armed with wire wool and a tin of paint but they had one big advantage – no one would challenge you for the last space on the pontoon. Aluminium was another material – no rust problems but you exchanged those for corrosion. There really is no perfect material for yacht or ship – it all comes down to cost and the purpose of the vessel. 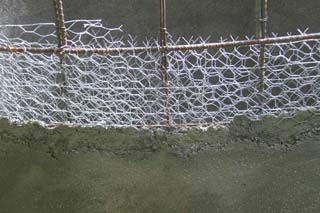 During the last war the seas around Europe were sown by both sides with thousands of mines. Many were magnetic or contained magnetic fuses. The British Navy realised that we had the largest fishing fleet in the world and many of these vessels were wood, so dozens were requisitioned and turned in to minesweepers, the non-magnetic hull giving some protection against the fuse. Today the Navy has eight Hunt class minesweepers built of GRP, also non-magnetic, the largest GRP warships in the world, some 200 feet long and displacing 750 tons.

Now, as we watch from the Lookout, we see dozens of different types of small craft passing us by. Most are GRP in some form or other, though there are a fair number of wooden dinghies. The types of craft have diversified and we see craft of which we would never have dreamed a few years ago. Kayaks are plentiful but there are paddleboards, body boards, surfboards, all mixed up on the waters close in and, hopefully outside the Speed Limit Buoys, RHIBs and jet skis roar up and down.

Kayaks now go far out to sea till they are just a dot where they stop and fish. What do you do if you catch a big one? Stuff it down in front of you and hope it does not wriggle too much. All of these things are grist to our mill, all need watching in case they get into difficulties. It is deeply satisfying to hand over your watch to the next person in the knowledge that no-one has had problem and, more importantly, to know that had something gone wrong you have the training to bring help and possibly save a life. We still need more people. Sue’s phone number is 01872-530500 and Chris is on 01326-270681.