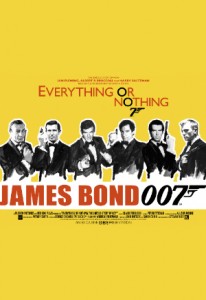 Everything Or Nothing focuses on three men with a shared dream: Bond producers Albert R. Broccoli, Harry Saltzman and author Ian Fleming. It’s an inspiring narrative behind the longest running film franchise in cinema history which began in 1962. With unprecedented access both to the key players involved and to Eon Productions extensive archive, this is the first time the inside story of the franchise has ever been told on screen in this way.

Director Stevan Riley does a great job of not only telling the story of the Bind franchise, but also reveals some lesser known facts about the internal rivalry and twists and turns of the lives of those involved. Starting with Ian Fleming himself, this excellent documentary follows the path to its inevitable success and shows the highs and lows of its stars, producers and franchises.

Verdict: A first class and gripping documentary which will entertain almost every audience. ****

This film will be shown at the Harbour Club, Portscatho on Monday 11th February. See trailer here