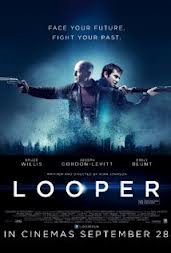 This is a futuristic action thriller set after time travel has been invented – but it is illegal and only available on the black market. When the mob wants to get rid of someone, they send their target 30 years into the past, where a ‘Looper’ – a hired gun, like Joe (Gordon-Levitt) – is waiting to clean up the mess. Joe is getting rich and life is good until the mob send back Joe’s future self (Willis) for assassination.

I must admit to secretly looking forward to this one… and it didn’t disappoint. Quite the opposite, in fact. It’s intelligent, engrossing and keeps you guessing till the end. For those who don’t like to think too hard during a night out at the flicks, this isn’t for you, but I found it highly entertaining.

Verdict: An excellent example of its genre with nice twists and good acting. ****