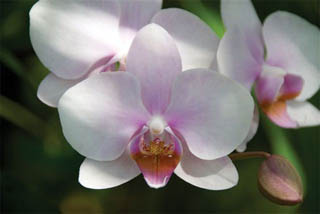 I bet you have been given, or treated yourself, to some of those brightly flowering house plants that adorn the supermarket shelves at Christmas. You may not have found too many in the garden centres. Much to my annoyance many of them see greater profit in wilting Christmas trees (more aptly Christmas tree stumps) or baubles to adorn the poor dead specimen. But that’s just a personal thought that often recurs at yuletide! And to see them dumped on the verges for re-cycling after all those valuable years of growth……..I could go on!

So what to do with the indoor exotica?

For instance, how much water do you give a moth orchid (phaelanopsis)? Those of you that have had a plant for years probably do the watering by instinct on the’ less is more basis’.  Very little water is the answer and if the leaves start to look like your fingers when you have spent too long in the bath then you know they need more. One lady I know who has many of these in rude health drenches hers, leaves them to drain and then does it again when they look dry. She doesn’t know who told her to do this but of course it works. 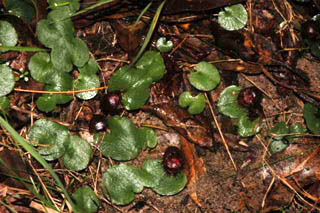 These orchids sit on the forest floor or on tree branches and have a fairly humid atmosphere (hence the plastic pots they often come in) and then they are drenched occasionally by tropical storms. The plastic pot also allows light to the roots as orchids have their roots on the surface of forest floor debris and need light to function. So don’t put them in a deep, dark pot but, at the very least, let some light to the roots at the top of the pot. I put mine into homemade terracotta pots that we drilled holes in to let in light, but another way is to put the rather nasty plastic pot into a goldfish vase – it rather takes the curse off the pot.

Why do the new buds drop off my orchid? Because it’s too wet!

Frankly the trick with moth orchids is to find a place that they like and leave them there! Not south facing all day in the sun and not behind closed curtains but cool to warm with light that is not direct.

Why do poinsettias die? 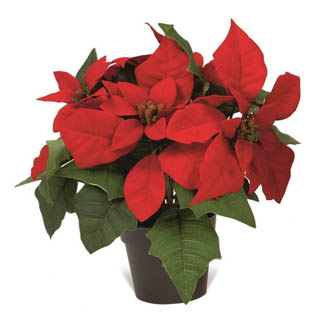 Well there are several reasons for this. Firstly did you get a good one or was it packed into a supermarket shelf, squashed in with all the others, no light and no air and probably not much water having come out of a climate controlled greenhouse with careful nurturing and then travelling hundreds of miles in a lorry? Poinsettias thrive on 12 hours light and 12 hours dark and this encourages the bracts to colour up.

An east facing window sill is perfect for them (not behind closed curtains at night), kept just damp but not wet and not in a hot room. Cut them back in February leave in a cool place, quite dry, but not completely and revive in late summer. They are so satisfying to keep going but the temptation will be to buy a new one, they are not expensive. Exactly the same treatment for indoor cyclamen which like it very cool. I had one in flower until July last year. They are best watered from the bottom as they succumb very quickly to grey mould or botrytis if the potting mixture is too wet. 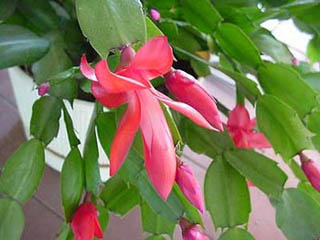 Why did my Christmas cactus flower early? There are six species of Schlumbergera but the two most common types are ‘truncata’ which flower Easter to Whitsun and ‘buckleyi’ which are so called Christmas cactus. Many of these flowered early mainly because the light levels in November were much lower and replicated December levels.

Outdoors the great flowering shrub now is the mahonia. It seems you either love ’em or hate ’em! I fall into the second category because they are very prickly when weeding and dropped leaves can unsuspectingly attach to your hands. But I do love to admire them from afar in others’ gardens.There is a new variety which is thorn less and has been marketed for only two years so I am waiting to see its success. It’s a bit like buying a new model of car – let others try it out first and iron out the glitches. However, the common varieties in flower at this time of year can, I admit, be spectacular, especially if the sun shines on them. 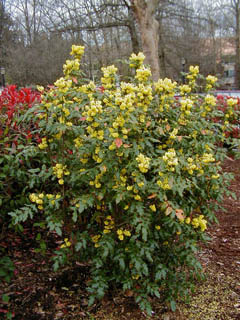 Mahonia is a genus of about 70 species of evergreen shrubs naturally found in woodlands and in rocky areas of the Himalaya, East Asia, Central and North America. It has everything really. Attractive foliage, bright and fragrant flowers, decorative and also edible fruits stacked with vitamin c. These fruits give rise to its common name of Oregon grape. The fruit is acidic and can be eaten raw or cooked and I am told by an advocate that they are delicious raw in porridge.

However they have many seeds and very little flesh so I suspect there is need for a toothpick. They are of the family Berberidaceae and there is some dispute amongst botanists that they should be termed berberris not mahonia.  Berberin is present in the roots of mahonia and has anti- bacterial properties, anti -tumour properties and is used as a bitter tonic. (I am becoming more attracted to this plant already!) It was named after an Irish political refugee Bernard McMahon who fled to America and opened a seed shop in Philadelphia and published the American gardener’s Calendar in 1806. 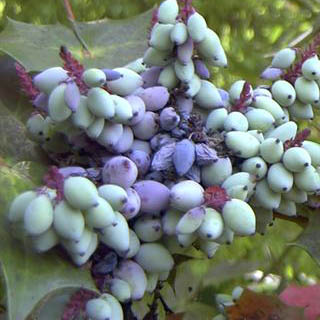 The most popular cultivar grown is Mahonia x media ‘Charity’, there are several medias which come from the word intermediate being a cross between M. japonica and M. lomariifolia. These more common varieties will take full sun but prefer partial shade in moist relatively fertile humus rich soil. The greatest problem with them is that they can get leggy. They can be pruned hard to the ground and will regenerate well though you may wait a couple of years for flowers, therefore I recommend cutting out about a third each year until it behaves in a better tidier shrub like way.

There are huge numbers of jobs to be getting on with this month, if the weather is conducive and the ground not too wet:-