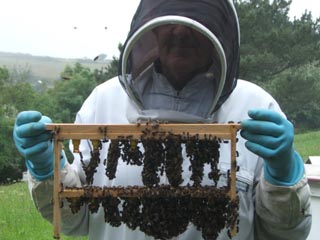 This is not a good year for honeybees – as if they didn’t already have enough problems with Colony Collapse Disorder, Varroa and neonicotinoid insecticides! The weather has brought very many colonies to the point of collapse through starvation, as the bees can neither get out to forage when it is raining nor can the flowers hold on to their nectar when the rain washes through their flower heads.

Having said that, there have been intervals of sunshine when the bees have been able to exit the hive en masse and quickly bring in sufficient stores to see them through the next day or so, mainly from plants with pendulous flowers (eg fuchsia), as the nectar is safe inside and can’t be washed out so easily – but for the honey supers to be totally empty during June is not a good thing from the bees’ point of view nor ours. Honey crops are likely to be very much down this year and this inevitably means the price of honey will go up, which I think is a bad thing, though there is still the hope for a good July during which the bees could make up for lost time. 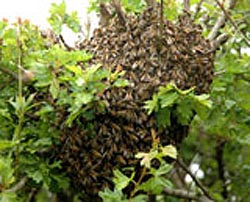 However, the bramble has been flowering for the past 2 weeks at least and this is a major source of nectar at this time of year, contributing immensely to the final crop. By the time the weather improves sufficiently for the bees to be able to forage full-time, it is highly likely that the bramble flowers will have finished, so depriving the bees of a valuable forage source and us of a good source of honey. But we shall see.

On the positive side, I have been able to make some splits to my prosperous hives, producing two or three nuclei (small colonies) from one big one. However, whilst the bees can raise new queens quite readily through this manipulation, if the weather doesn’t warm up considerably in two weeks time or so, it is highly likely that the virgin queens will be unable to mate. This will mean they will only be able to lay drone (unfertilised) eggs and the colony is doomed, as the drones contribute nothing to the foraging and food processing of the hive. 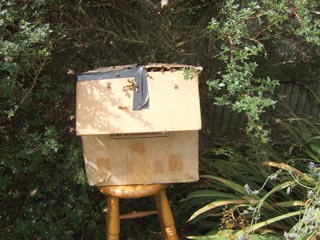 However, I have additionally been breeding queens from a selected stock of my bees which shows native tendencies – dark colouring, good foraging and fecund/prolific queen amongst other attributes. I am using my new toy, the Jenter kit, for the first time and so far (touch wood!) the bees are playing ball. I arranged for the selected queen (from what we call the “breeder” colony) to lay eggs in a special comb. After 4 days, another colony was made temporarily queen-less and all its brood removed. After about 5 hrs. those bees were literally roaring, a typical response to their suddenly having no queen. At this point, the special comb from the breeder colony was removed, the larvae that had hatched from the eggs laid by the selected queen were transferred one by one to a special frame with two horizontal bars instead of comb, and the frame inserted into the queen-less colony.

Suddenly the roaring started to fade as the bees saw the possibility of raising a new queen from the inserted larvae (remember, I had purposely removed all their own brood earlier in the day), and they set to to do just that. The young bees started feeding the larvae with Royal Jelly to allow the development of the queens’ glands and when I looked yesterday the queen cells were being drawn down by the bees (see accompanying photo), with one on the point of being sealed. If this continues with the other larvae then I should end up with about 14 virgin queens which I can use to create more nuclei or to re-queen stocks of non-favourable characteristics. 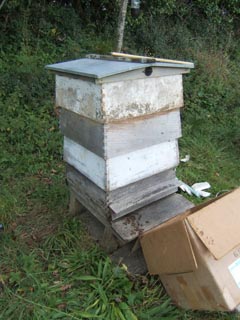 All this depends on the weather, of course, because, like the splits with virgin queens, if the weather is not suitable for mating it will all have been a waste of time and I will have to start again. It also depends on my removing the queen cells just before the virgins would hatch, because if just one virgin emerges before I remove the cells, she will go round all the other queen cells and tear them down!! That would annoy me slightly!!

So, what else? Despite the poor weather reducing the likelihood of natural swarming (because there are likely to be insufficient stores to feed up a swarm before it leaves the colony), there are still what are called “starvation” swarms. I collected one 2 weeks ago in a hawthorn tree in Grampound Road. When I tried to hive it, the bees were very reluctant to enter the hive and seemed very moribund, so I really had to force them in, taking handfuls and dropping them into the inner brood box.

I fed them the following night and it is obvious from the way they are behaving now in comparison to before, that their lives have been saved, as they are devouring the food and building new comb as if their lives depended upon it (which they do, as they need to get set up for winter) and flying as if celebrating their new-found second chance. I doubt I will get any honey from them this year but if they carry on building up, they will become a strong colony to go into the winter ready for the season next year – “A swarm of bees in June is worth a silver spoon”, as the old adage goes.

So if you see any swarms hanging in a tree or wherever, let me know and I will arrange for their removal, either by myself or another beekeeper, depending on where you live. In the meantime, enjoy the mid-summer weather!!