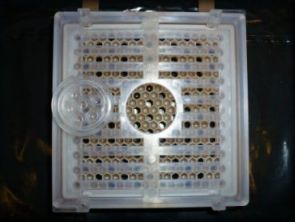 What an interesting season this has been for our bees – an early Spring in March encouraged them to build up very rapidly, but then the poor things were confined to their hives during the cold, wet and wintry April. Meanwhile, the brood that had been laid by the queen (who had been conned into thinking the season had started!) needed feeding, so the stores gathered in March were put to good use. But with so many young larval mouths to feed, the in-house reserves didn’t last long and as a result many hives were found to be on the brink of collapse through the inability to get out and forage for replenishments.

If saved by the watchful beekeeper who then fed them, they survived to the point where now they are out and about every day and rather than finding themselves short of food are actually bringing in a greater amount than earlier because of all the younger brood that has meanwhile hatched and become part of the “team”. This means that on several of my hives there are honey supers filled and being filled with 2012 nectar. This will be converted to honey in the warmth of the hive and if the weather continues to hold (though it doesn’t look very likely) we might be able to remove some of it for our own use. Time alone will tell! 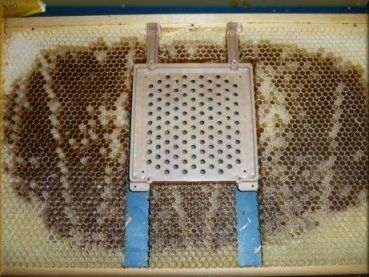 In the meantime, there is the queen rearing to think about. I have already had my first Miller frame drawn out by the bees and laid in by my breeder queen. This has been inserted into another (this time, queen-less) colony which will develop the hatching eggs into queen larvae, and just prior to their emergence the ripe queen cells will be distributed amongst a range of mini-nuclei stocked with queen-less bees. These bees will take to their new queen with gusto (or the choice is they will perish) and she will mate in quite a short time compared with virgin queens mating from fully populated colonies (no, I don’t know why, either!).

Having proved their worth (laying pattern, health, characteristics such as temper, etc), they will then be integrated into standard sized nucleus boxes for bringing on. Also, do you remember me referring to my new toy a month or so back? This is a so-called Jenter system in which the queen is confined for a few hours to one special comb, so she is forced to lay eggs only in that. The comb is removed after about 12 hours and the queen released. 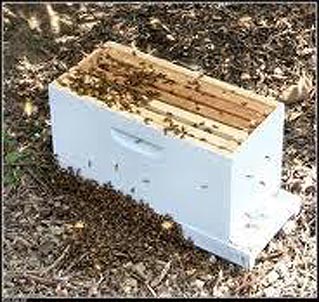 Three days later, her larvae (hatched from the eggs she has just laid) are then popped out of the special comb, one at a time, attached to special inserts in the back of the comb and placed in a vertical position on a horizontal bar in an otherwise empty frame. The frame and bar, or bars, is then inserted into a “finishing” colony to raise the desired queen cells, which are then treated exactly as with the Miller system. At the end of the day, a beekeeper can end up with dozens of queens produced using these techniques, so care has to be taken to ensure there are either nuclei facilities available or willing recipients for these queens – there is no point creating life if it is going to be snuffed out by a poorly prepared beekeeper.

Anyway, my Jenter comb is almost ready (the bees are preparing the comb as I write), so it will be interesting to see which method is more successful. Otherwise, it is a question of looking out for swarms (there have been a lot around already this year owing to the freaky weather) and ensuring they are reported for collection. The honeybee is an endangered species and since it is responsible for every third mouthful of food we eat, it is essential we safe-guard its future. Call me if you see a swarm and I will arrange its removal, normally at no cost (if it actually is a swarm and not a colony that has been in residence since it swarmed there last year or the year before – this is a totally different ball-game!). Enjoy the good weather whilst it lasts!