In May, National Trust volunteers took part in a research project with a team of scientists from Natural England to help survey and control the Pacific oyster population on the Fal’s shore. 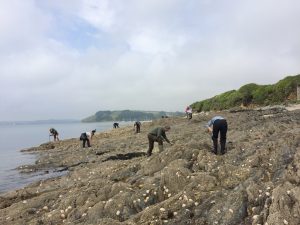 The Pacific oyster is a non-native species first introduced to Britain in 1926 and then farmed commercially from the 1960s, when the cooler temperature of UK seas prevented the spread of this marine mollusc. But warmer seas in recent years have enabled wild populations of Pacific oyster to increase in some estuaries.

Natural England has monitored Pacific oyster populations on the shores of the Roseland since 2014.  These shores are within the Fal and Helford Special Area of Conservation and Lower Fal and Helford intertidal Site of Special Scientific Interest.

Surveys during the winter of 2016/7 showed a definite increase in oyster numbers.  The main concern is that at high densities, Pacific oysters form reefs.  The species is much bigger than our native oyster and can reduce food supplies and limit growth of the economically important Blue Mussel. Breaking the Pacific oyster shells with hammers is currently 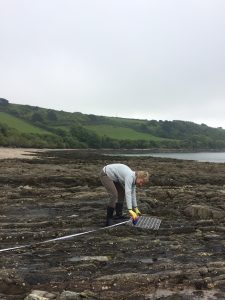 the best way to reduce oyster numbers on rocks, but research continues to find the best methods for each type of substrate.

The National Trust provided volunteer assistance to Natural England to help control the oysters and on a low tide in May, Matt Ashley and his team trained us in methods of surveying and managing Pacific oysters.  Knowing the difference between the native Edible oyster and its Pacific cousin was essential; the Pacific bivalve is about three times longer with wavy shell margins and raised shell ridges.  Equipped with quadrats, tapes and survey forms, some of us counted and recorded Pacific oyster numbers on rocks along the shoreline from St. Just in Roseland to St. Mawes.   Others were supervised in the control work, using hammers to break the exposed shells of as many oysters as possible.

In 2014 the survey had recorded relatively low numbers of Pacific oysters but our survey in May this year showed there had been an approximate ten-fold increase in three years in specific ‘hotspots’ along the shore.

Natural England intends to work with the NT again in late autumn to monitor and control wild Pacific oyster populations. Matt Ashley returned to St. Just for another survey recently – the density of Pacific oysters had been reduced by on average 80{c8c3b3d140ed11cb7662417ff7b2dc686ffa9c2daf0848ac14f76e68f36d0c20} of the last findings.  Our efforts in May were successful!