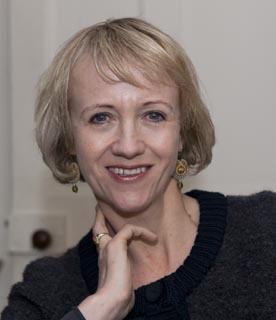 Given Virginia’s literary pedigree, the obvious place to start is with the question, have you always wanted to be a writer?

“I used to write fairy stories when I was little, but I didn’t intend to be a writer. I think when your great-aunt is Virginia Woolf (as mine is) it seems almost presumptuous to have writing ambitions. Her presence in my life, even though she was long dead, initially put paid to any such aims I might have had. Instead I told my mother that when I grew up I wanted to do something that involved reading books all day. I became a writer more or less by accident, after a career in TV research. My father, (the writer Quentin Bell), who was very ill, wanted me to help him with a book he was writing, and I took it over from him after he died. That was the start. Now I’ve got the bug – but I’ve also fulfilled that early desire to read books all day – which is just what I do when I’m researching.”

With her latest book (reviewed for Roseland online last month), Virginia’s aim was to tell a completely different story to the “accepted” male-oriented guns-and-medals history of the war, Spitfire pilots, brave deeds on the Normandy beaches, Bomber Harris, Winston Churchill and so on.

“I wanted to tell a story that I and others could identify with, and that meant putting the emphasis on women. It was important to focus on ordinary, frightened women who had to deal with the everyday reality of war. There had been enough books about heroines. I wanted to reach readers who would be able to say “that could have been my mum or my gran. Understanding and learning from history means getting under the skin of the people who made it. That means ordinary people, not just leaders, power brokers and celebrities. That’s why I chose the title “Millions Like Us.”

The target audience was the daughters and grand-daughters of the women in the book and all the “millions like us”. Virginia would love to think that, while older women may read the book and feel a mix of nostalgia and recognition, younger readers will discover a new respect and admiration for them. However, she has been happily surprised to find how many men come to her talks and discover a different perspective on that generation’s contribution to the war.

“Millions like us” took nearly two and a half years to research, and a year and a half to write, with the research process continuing alongside the writing – but, as she explains.

“There comes a time when you have amassed so much material, and you feel you’ve got to start making sense of it, and write something. It was the biggest project I’ve ever taken on, but all my books of social history take at least three years from start to finish. I have a poky but very comfortable little study. It’s actually a converted boiler house. Every available space is taken up by my research books, and any wall space that’s left over is papered with silly postcards, birthday cards made for me by my daughters, that sort of thing. I try to keep some distance between my work and whatever’s going on in the rest of the house, but it’s not always easy, and I lack discipline when it comes to taking phone calls and answering emails.”

“I’m a year into the research on a book about women’s experiences of the 1950s; it won’t be out till 2014. I’m having great fun, digging into the lives of a range of women from nurses to miners’ wives, fashion models to air hostesses, Young Conservatives to anti-nuclear protesters. What a fascinating hybrid decade it was – ranging from the Mothers’ Union to Rock’n’Roll. And if there’s a 1950s Miss World contestant or a 1950s Caribbean immigrant (female) out there who’d like to be interviewed, please get in touch*.”

On behalf of all Roseland online’s would-be writers, I asked for advice to people who want to write. 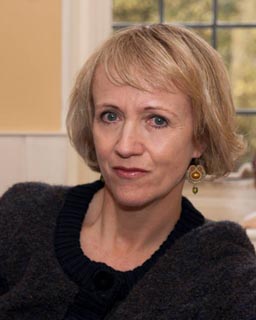 “My advice is read. Read good, well-written books. I get depressed by illiteracy, and become a thoroughly grumpy old woman when confronted by misplaced apostrophes, redundant exclamation marks, bad spelling, clumsy sentences, clichés and jargon.” [Note to self, double check this interview before it goes to print.]

“My other piece of advice is: don’t be above criticism. Show what you write to people you respect, and really listen to what they say. They are more likely to be right than you. Apart from that, it entirely depends what kind of writing you want to do. I only do non-fiction, and I’m first and foremost a researcher, though my love of stories means I always look for the narrative in any material. So don’t ask me how to write fiction. It’s a mystery to me and I’m in awe of people (like my husband, novelist William Nicholson) who can spin imaginative stories out of their heads. I like to have factual guy-ropes firmly attaching me to the ground. Research is my bedrock, it’s what excites me. All the books I’ve written have been about the last 100 years, and that’s because I like dealing with history that is still – just – within living memory. You can still reach out and touch it…” 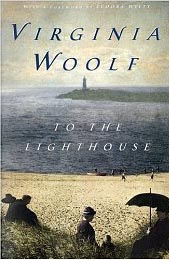 Finally, a mention of Virginia’s links to Cornwall. Her favourite book by Virginia Woolf is.

“To the Lighthouse” – based on childhood memories of summer holidays at St Ives. “I went there some years ago, and loved sensing echoes of the artistic subcultures that flocked to St Ives and nearby coastal villages in the early part of the 20th Century. The natural beauty of that area is still superlative and art is still so alive in Cornwall, which has got to be good.”

And with wonderful writers like Virginia, it seems we can look forward to books which come alive too.