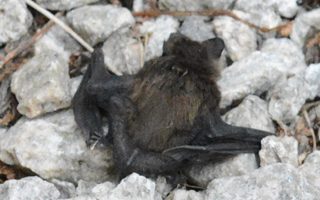 Did you know that Bats are our only flying mammal, their “wings” are really hands and the Pipistrelle, the commonest on the Roseland, weighs less than a 2p coin and is only 4 cm long?

They really are fascinating creatures. Bats have poor sight, but also have highly developed echo locators so sensitive they can detect the gossamer of spiders’ webs. One tiny Pipistrelle can catch typically 3000 flying insects a night.

Bats only have one pup a year, that they are fed on milk, just like other baby mammals, and that they can survive from five to thirty years old. When bats hibernate their heartbeat drops to two beats a minute.

From fossil evidence, bats have been around for thirty million years and that they are closely related in bone structure to primates like us. There are seventeen species of bats in the UK, which are all protected under the Habitats Directive and the Countryside and Wildlife legislation. 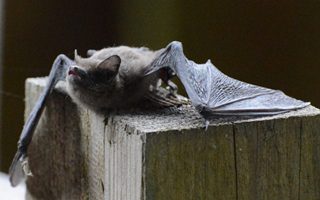 The Pipistrelle is the first we see as dusk approaches, as they zigzag, hover, and, occasionally, fly backwards, efficiently eating those many biting midges! The rest of the species, emerge later, in order of size, until finally the Noctule appears.

We are fortunate on the Roseland as we have in addition to the Noctule and the Common Pipistrelle, the tiny Daubenton’s which hunts low over water, the Soprano Pipistrelle, the scarce Brown Longeared, the very occasional Whiskered/Brandt’s, the rare Barbastrelle, rarer Bechstein, and the gradually recovering Greater Horseshoe Bat, the last having dropped by ninety per cent in the twentieth century, and which is still confined to the Southwest of England and South Wales.

It is believed that the massive reduction in populations was caused by a lack of insects due to pesticide use, a lack of habitat due to hedgerow and tree removal, the destruction and alteration of buildings previously used for roosting and breeding, artificial lighting which bats shun, and now, where they are prevalent, an increase in danger from wind turbine blades!

Interestingly, populations are increasing in parts of the UK where note is being taken of conservation proposals in planning and the countryside.

To learn more join our Bat Detection evening walk on the 15th August although you must book in advance, as numbers are strictly limited.

Contact David Hall 01872 501429 or email hallruan@aol.com for further details and to reserve a place. (Sorry, no dogs)